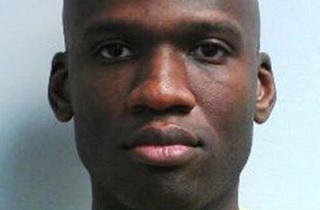 Among the disturbing revelations to emerge about deceased Washington Navy Yard shooter Aaron Alexis is a Rhode Island police report that details a bizarre encounter weeks before the shooting, an incident that police say they reported to the Navy. According to the August 7 Newport Police report, Alexis called police to report “harassment” by three unseen people who were following him, and keeping him awake by sending “vibrations into his body.”

On August 7, 2013, I was assigned to car 1. At about 0623  hours, Officer Cormier and I were dispatched to the Marriott Hotel, Room 405 for a harassment report. I responded from city yard.

At the end of the report is this notation from Sgt. Frank Rosa, who approved the report (Alexis’ name and the name of the Navy contact were redacted from the report):

This incident is just the most recent in a string of contacts with police that has many wondering how Alexis retained his security clearance. Here are the police records related to Alexis’ past incidents:

[photo via Ft. Worth Police]