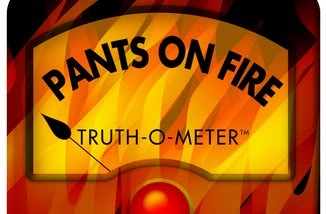 Here’s news that ought to excite gun collectors: did you know that citizens aren’t banned from owning assault rifles? It must be true, because PolitiFact says so.

PolitiFact fact-checked an assertion from Republican Wisconsin Senator Ron Johnson that “assault rifles already are banned,” and found it Mostly False. Their reasoning, however, is particularly sloppy. Here’s their conclusion; see if you can catch where PolitiFact falsely conflated two very separate issues:

Some, including Johnson, contend that only weapons that are automatic — firing continuously when the trigger is held down are assault weapons — are assault weapons. Those are essentially prohibited by federal laws. But that definition is narrow, and Johnson’s claim gives a misleading impression of a comprehensive ban.

Lawmakers, law enforcement officials and others widely refer to many semiautomatic weapons like the rifle used in Orlando and other mass shootings — which reload automatically but fire only once each time the trigger is depressed — as assault weapons. Those are not banned by federal law.

Did you catch it? Johnson’s statement was that assault rifles were banned. But in its conclusion– and the fact-check leading up to that conclusion– PolitiFact treats it as though Johnson said assault weapons are banned. PolitiFact argues that the two are the same, when they refer to completely different types of weapons. (How they managed to fact-check a five-word statement and get one of the words entirely wrong is beyond me).

“Assault weapon” is a somewhat nebulous term that was created by American politicians in the 1980’s. What is or isn’t an assault weapon is essentially a matter of opinion and law: guns that were illegal “assault weapons” under the former Federal Assault Weapons Ban were often distinct from their legal counterparts based only on arbitrary minutiae, such as whether or not they had a barrel shroud or a pistol grip.

“In general, assault weapons are semiautomatic firearms with a large magazine of ammunition that were designed and configured for rapid fire and combat use,” the Justice Department said back in 1994 when the ban was passed. But “assault rifles” are an entirely different beast. That term is only used to military grade weapons capable of automatic fire. Kalashnikovs, M16s, that’s the kind of firepower we’re talking about. Johnson was 100% correct: those weapons are banned.

When contacted by PolitiFact, Johnson’s office pointed out the difference, but PolitiFact brushed it off as “technical military definitions.” Johnson’s office actually provided the email they sent them to RightWisconsin, and includes exhaustive evidence that “assault rifle” has a very specific meaning that doesn’t include semi-automatic weapons:

Most recently, on Monday the Washington Post pointed this out in its news story about the AR-15: “An assault rifle, by definition, means that the weapon is fully automatic.” The paper pointed out that the AR-15 is usually a semiautomatic, meaning one pull of the trigger discharges one round.

The AP stylebook makes this distinction, too. The 2013 update said, in relevant part, “Assault rifle is a military weapon with a selector switch for firing in either fully automatic or semi-automatic mode.”

The National Rifle Association agrees, saying that the U.S. Army defines “assault rifle” as “a selective-fire rifle chambered for a cartridge of intermediate power. If applied to any semi-automatic firearm regardless of its cosmetic similarity to a true assault rifle, the term is incorrect.”

Similarly, a recent paper from the Cato Institute points out that “The definition of ‘assault rifle’ is supplied by the Defense Intelligence Agency: ‘short, compact, selective-fire weapons that fire a cartridge intermediate in power between a submachine gun and rifle cartridges.’”

Despite being provided all these sources, PolitiFact went ahead and claimed that semi-automatic weapons are considered assault rifles. At what does stubbornness cross a line into intentional dishonesty? I’d say right about there.

The only evidence PolitiFact provides that assault weapons are considered assault rifles is that “the weapons used in the mass shootings in San Bernardino, Calif., Aurora, Colo. and Newtown, Conn. — all of which were semiautomatic — were all described by police as assault rifles.” Even if that were true, it wouldn’t say much: police spokesmen can be just as sloppy with gun terminology as political spokesmen.

But clicking the hyperlinked examples provided by PolitiFact, there’s no quotes from any of the spokesmen in question actually using the term “assault rifle.” Here’s CBS, for example: “Burguan says the suspects were wearing ‘assault-style clothing’ and were both armed with assault rifles and handguns.” It’s possible Officer Burguan did use the term “assault rifle,” but it’s equally possible that that it’s CBS who made the error when paraphrasing him.

I don’t doubt that some policemen have probably called AR-15s “assault rifles” in the wake of mass shootings, because that’s a very common misconception in general. But not only does PolitiFact not explain why individual local policemen are the experts on gun terminology over the NRA, the military, defense intelligence, etc., they never provide any actual evidence that a policeman ever has used that term. For a supposed fact-check, it’s missing all the actual facts.