Poll: 39% Of People Who Think Benghazi Is Biggest Scandal Ever Don’t Know Where It Is

Poll: 39% Of People Who Think Benghazi Is Biggest Scandal Ever Don’t Know Where It Is 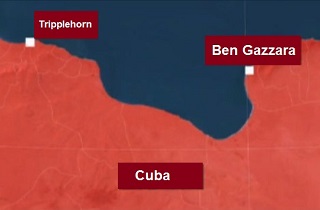 Earlier today, President Obama told reporters that the brouhaha over the formulation of talking points on the attacks in Benghazi was “a sideshow,” but as it turns out, the entire issue of Benghazi is nothing but a sideshow to those making the most noise about it.

One interesting thing about the voters who think Benghazi is the biggest political scandal in American history is that 39% of them don’t actually know where it is. 10% think it’s in
Egypt, 9% in Iran, 6% in Cuba, 5% in Syria, 4% in Iraq, and 1% each in North Korea and Liberia, with 4% not willing to venture a guess.

That’s not to mention the ones who said “Wasn’t he the bad guy in Road House?”

I’m actually impressed that 58% of Americans were correctly able to identify where Benghazi is, because I’m sure there are a significant number of people who think that Watergate took place in Atlantis. One thing you learn from reading polls is that Americans aren’t all that great at knowing stuff. The people who think Benghazi is the biggest scandal in history were actually slightly more able to identify where the city is, but only by 3%. You would think that those people would be much more likely to know where it is, and least likely to think it’s in Cuba, their third most popular wrong answer.

PPP’s poll also showed that Hillary Clinton’s approval rating has remained steady since their last poll, in March, an indication that despite efforts to target her over the Benghazi issue, it might not hurt her politically. Some of that will depend on whether conservatives continue to come to her defense, but also on how much media attention this issue, Benghazi as scandal, continues to get. At a certain point, the noise reaches a volume that penetrates low-information voters, and the details matter less.