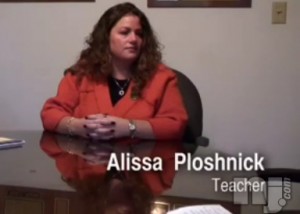 In an interview with Mediaite yesterday, James O’Keefe defended his false assertion that a journalism professor told him that Sam Stein “get(s) sources drunk” to get a story out of them. After our interview, a reader emailed us to point out that O’Keefe’s Project Veritas was accused of doing the very same thing, on steroids. According to The Newark Star Ledger, an O’Keefe operative spent three hours buying drinks for schoolteacher Alissa Ploshnick, all while secretly videotaping her.

Ploshnick, a 20-year veteran teacher who was once commended by President Bill Clinton for heroically saving the life of a student, was suspended from her job over her unwilling appearance in an O’Keefe project called Teachers Unions Gone Wild, an appearance she says was fueled by the demon booze for which O’Keefe now tries to smear Sam Stein. From The Star Ledger:

Ploshnick, 38 and single, was unlucky enough to be hit on in an East Brunswick bar in August by a young guy working for pretend journalist and admitted criminal James O’Keefe, the conservative attack dog who pleaded guilty to federal charges of entering a U.S. senator’s office under false pretenses. He is on probation. He also tried to embarrass CNN recently by setting up a planned, taped attempt to seduce reporter Abbie Boudreau. It failed when one of his operatives tipped Boudreau off.

O’Keefe’s operative bought drinks for Ploshnick and began asking about tenure. Ploshnick talked about how difficult it was to fire a tenured teacher. She said some things she shouldn’t have said. She quoted someone else as having used a racial obscenity, the so-called “n-word.”

But the phony Lothario sitting with her — plying her with drinks and laughing and egging her on — taped her every word. Including that word.

After our interview, I emailed James O’Keefe to give him a chance to respond to this apparent hypocrisy. The exchange became very involved, so I’m simply going to reproduce it here, as I think it illuminates something that most people miss about the name of O’Keefe’s endeavor, Project Veritas. It’s not a noun, it’s a command: Project Veritas.

This is the video to which O’Keefe refers in our email exchange:

NEXT: Full Text Of Emails Between Tommy Christopher And James O’Keefe