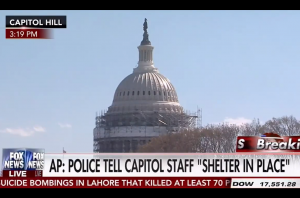 Ah yes, like clockwork, Fox News was the first of the main cable networks to allude to the fact that the very much active Capitol shooting situation — the one unfolding right before our eyes, with very little known information — could be tied to the Islamic State.

While veteran stalwart Shep Smith anchored the afternoon coverage of the shooting, he spoke with Catherine Herridge by phone, the Fox News Chief Correspondent in Washington DC who spoke about the ongoing situation. At the time of the interview (about 3:15 p.m. ET), very little information was known; a shooter has been reported somewhere in the Capitol Visitor’s Center, and reports indicated that one police officer had been non-seriously shot and the shooter in custody.

That’s it. No other details. No defining characteristics about the shooter, no reports of what was yelled during the shooting, nothing to indicate anything more than the aforementioned scant details.

But that doesn’t make for good TV, does it? Enter Herridge, who repeatedly returned to the fact that reports described a nearby civilian as being hit with “shrapnel.”

“I’m a little puzzled by the choice of words here ‘shrapnel’,” Herridge editorialized to Smith. She could have easily stopped there and not began to offer any sort of hypothetical, but again, playing to people’s fears usually wins the day in these situations, so Herridge blindly continued, “I’m not sure what to make of that at this point. Whether it was bullet shrapnel, or something else.” (Note: The “something else” Herridge is referring to? Homemade explosive devices, you know, the ones recruits and ISIS-inspired attackers use).

But instead of simply casually referring to ISIS, why not just come right out and say the name? Enter Herridge again, moments later, who drew on the fear from last week’s Belgium attacks:

“ISIS likes to sort of flood the airwaves, if you will, after an event like [Belgium] to kind of capitalize on the event. And in the last 24-48 hours, there have been several messages specifically about the United States.”

Of course, Herridge doesn’t clarify what “messages” she’s referring to from the global radicalized terror group in the last day, but specifics don’t matter in real-time fear mongering. “I’m not saying they’re connected because we don’t have that information at this point, but people are pretty keyed up.”

It’s beyond the realm of irresponsibility to mention any sort of indicators to the Islamic State, but as I’ve mentioned, sticking to cold hard facts sometimes just isn’t too sexy. Herridge did admit that the information is lacking — which Smith fervently agreed with — and certainly we know that ISIS has made roundabout threats to the well-being of the United States in the past. But just as Hillary Clinton was chastised for taking a stand on sensible gun ownership in the hours following the initial San Bernardino reports, Fox needs to hold its contributors more accountable for even blindly and irresponsibly alluding to organized terrorism when the facts were simply unknown.

Watch the above interview from Fox News.