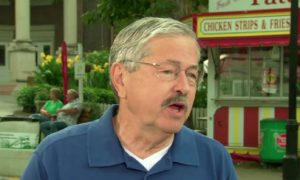 It was announced today that President-elect Donald Trump had filled a position that will likely have immediate implications and importance due to Trump’s own actions on the campaign trail and in recent days.

Iowa Governor Terry Branstad has been tapped to be the United States ambassador to China, according to Bloomberg Politics. The long-serving Republican governor, who first held Iowa’s top job from 1983 to 1999 and jumped back into the spot in 2011, had been name-checked by Trump during the campaign as a candidate for the ambassadorship.

Branstad was seen at Trump Tower on Tuesday afternoon and spent an hour meeting with the incoming POTUS. After speaking with Trump, he didn’t comment on whether or not he had been offered a position, but did state that he was happy with the people Trump had chosen for his cabinet.

Trump is likely hoping Branstad’s relationship with Chinese President Xi Jinping will help in diplomatic relations with the country. Per Bloomberg, the Iowa guv first met the Xi in 1985 and they have maintained a relationship since.

Branstad and Xi met when China’s leader made his first trip to Iowa in 1985 during a sister-state exchange. At the time Xi was a young agricultural official from Hebei province, working as director of the Feed Association of Shijiazhuang Prefecture.

The two men have reconnected several times since then. Despite their cultural differences, the pair forged strong bonds and have used their mutual love of agriculture to bridge the gap between their respective countries on human rights, economic issues and other tensions.

Potential diplomatic tensions with China are already facing Trump’s administration before he even steps into the White House. Not only has he been vocally critical about their trade and economic policies, Trump broke with long-standing tradition by speaking directly to Taiwan’s president. He became the first President or President-elect to speak with a Taiwanese leader in nearly 40 years, breaking with the ‘One China’ policy America has recognized since the 1970s.