President Obama Calls Out Media’s ‘Both Sides’ Narrative on Shutdown 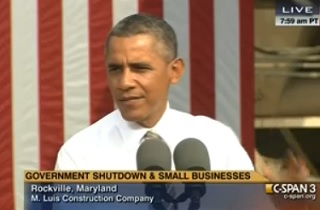 Coverage of the Republican effort to undo Obamacare via government shutdown/default has been characterized by attempts to assign responsibility for the dual crises to both sides, and to draw the President into a hostage negotiation about a settled matter. In a speech Thursday morning, President Obama called out the mainstream media narrative that “both sides” are to blame, and broke it down like a Current TV set.

The President gave a speech, this morning, at the M. Luis Construction Company in Rockville Maryland, in which he pressured Republicans in Congress to end the government shutdown, but also challenged the narrative that “both sides” are somehow to blame for the shutdown, and the looming debt ceiling crisis.

“Sometimes when this gets reported on,” the President said, “everybody kind of thinks, ‘both sides are squabbling, Democrats and Republicans, they are always arguing. Neither side’s behaving properly.'”

“I want everyone to understand what happened here,” he continued. “The Republicans passed a temporary budget for two months, at a funding level we as Democrats think is way too low because we are not providing help for more small businesses, doing more for early childhood education, doing more to rebuild our infrastructure, but we said while we are still trying to figure out this budget, we are prepared to go ahead and take the Republican budget levels that they proposed.”

“So the Senate passed that with no strings attached,” President Obama explained. “Not because it had everything the Democrats wanted. In fact, it had very little that the Democrats wanted, but we said, let’s go ahead and make sure that other people aren’t hurt while negotiations are still taking place.”

He also explained that a clean CR, with no additional demands, is being denied a vote by Speaker John Boehner, and that it would likely pass if a vote were allowed. “Put it on the floor and let every individual member of Congress make up their own minds,” Obama declared. “They can show the American people, are you for a shutdown or not? If you’re not for a shutdown, vote for the bill or don’t vote for the bill. We don’t have to twist anybody’s arms.”

Whether you agree that the shutdown strategy is valid or not, as the President says, there is no mistaking that it is the Republicans’ strategy alone, yet the mainstream media continues to try and insist that their hostage strategy is President Obama’s fault, too, and that he should negotiate with them.

There’s an old joke that perfectly illustrates the media’s coverage of this, and pretty much every other political story. A guy walks up to an attractive woman on the street and says “Hey, baby, you wanna f*ck?”

If the media were to cover this event, they would report that “some say the man’s advance was inappropriate and vulgar,” but would also wonder “why won’t this woman at least sit down and negotiate with the other side?”

When the man’s further offers of “a handy” and “just the tip, just to see how it feels” were met with similar responses, the media would no doubt express a hope that the woman would “open the fist a little bit” and “reach out to the other side,” because surely she bears some share of the blame, doesn’t she? Shouldn’t she at least offer the guy something to allow him to save face?

The difference here is that Republicans are screwing the entire country, including themselves, in their fruitless attempt at a conquest they have already been irrevocably denied. No means no, and if they don’t understand that, the media ought to.