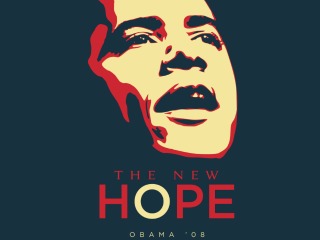 We’re living in some strange times, people. President Barack Obama recently and rather surprisingly referenced a (much-quoted, if Mediaite commenters are any indication) quip by former Alaska governor Sarah Palin, transforming her criticism of him into something a bit more positive.

Obama told supporters at a New York fundraiser that “all that hopey changey stuff” he’d espoused during his first run for president had been genuine:

All that hopey changey stuff, as they say? That was real. It wasn’t something …it was real, you could feel it. You know it. It’s still there. Even in the midst of this hardship. But it’s hard. When I was in Grant Park that night, I warned everybody this was going to be hard, this wasn’t the end it was the beginning.

Obama added that, after a few years, “the hope poster starts fading,” that the sentiment behind it is still alive and well among Americans.

Politico’s Alexander Burns offered a spot-on assessment of the tactics at play in essentially trying to turn Palin’s words — and their negative sentiments — against her:

In a way, the combination of reviving good feelings from 2008 and spotlighting Palin-like bogeymen who scare independent voters is a decent snapshot of the Democrats’ 2012 strategy at this point.

But… will it work? Obama may have been preaching to the choir during the speech, but we can’t help but wonder whether those who already harbor negative feelings about the President (and annoyance over his “hope” campaign) will simply see this as a jab at Palin and, thus, feel further alienated.