President Obama Responds to Gates Criticism: ‘We Got the Policy Right’
video

President Obama Responds to Gates Criticism: ‘We Got the Policy Right’ 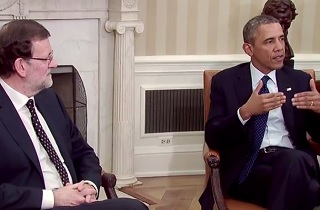 In case you hadn’t heard, former Secretary of Defense Robert Gates wrote a book, and in that book were some harsh criticisms of President Obama, along with some praise. On Monday, the President took questions in the Oval Office following a meeting with President Mariano Rajoy of Spain, and was asked for his reaction to one of Gates’ criticisms.

Following the President’s remarks, AFP’s Stephen Collinson asked, “Can I ask you to respond to Secretary Gates’s statement where by the end of 2011 you had lost faith in the Afghan strategy and its commander? And are you at all irked that this book came out during your presidency while American troops are still at war?”

“Secretary Gates did an outstanding job for me as Secretary of Defense,” the President said. “As he notes, he and I and the rest of my national security team came up with a strategy for Afghanistan that was the right strategy and we are continuing to execute. And I think that what’s important is that we got the policy right, but that this is hard and it always has been. Whenever you’ve got men and women that you are sending into harm’s way after having already made enormous investments of blood and treasure in another country, then part of your job as Commander-in-Chief is to sweat the details on it and to recognize that there’s enormous sacrifices that are being made, and you’re constantly asking yourselves questions about how you can improve the strategy.”

President Obama continued, “The good news is, is that because of that strategy that we came up with, by the end of this year we will have completed combat operations in Afghanistan. We are in a position to continue to assist the Afghan people in making sure that they have a stable country that is working on behalf of the Afghan people and that it is a good partner with us.”

“But war is never easy,” he added, “and I think that all of us who have been involved in that process understand that. But I want to emphasize that during his tenure here, Secretary Gates was an outstanding Secretary of Defense, a good friend of mine, and I’ll always be grateful for his service.”

After waiting for the Spanish translation of his answer, Obama decided he had a little bit more to say, adding “One last thing I want to say about this though, Steve, just as I have continued to have faith in our mission, most importantly I’ve had unwavering confidence in our troops and their performance in some of the most difficult situations imaginable. That job is not yet done. And I do think it’s important for Americans to recognize that we still have young men and women in harm’s way, along with coalition partners who are continuing to make sacrifices, and we need to see this job all the way through. And that is going to be the case through the end of this year, and we’re going to continue to have significant interest in the region for years to come.”

Here’s the video, from the White House: