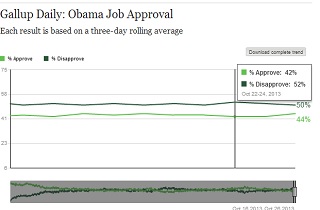 Many political observers lamented, on behalf of Republicans, how their strategy to defund Obamacare via a government shutdown had deflected attention away from the significant difficulties with the Obamacare website’s rollout. For the past week, though, the mainstream media has been going at the health care law like a Death Star piñata at Comic-Con, and the result has been… an uptick in President Obama’s approval rating, which is now identical to what it was the day the government shut down. From Gallup’s daily tracking poll: 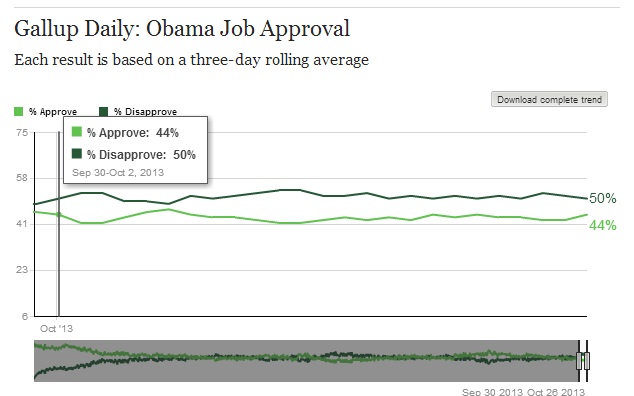 As you can see, the President’s approval rating is the same as it was on October 1, the day the government shutdown began, and is two points higher than it was early last week, when the mainstream media began covering the Obamacare rollout in earnest.

Granted, it’s a small uptick, and 44% approval vs. 50% disapproval is nothing to write home about, but given the brutal, deliberately one-sided coverage of the Affordable Care Act last week, that there is any movement in a positive direction is somewhat amazing. While no one is happy about the problems that have plagued the rollout, this (admittedly early) indicator could signal that people are generally rooting for the law’s success, and may not view those seeking to destroy it in such a favorable light. If the website’s difficulties can be ironed out in fairly short order, and/or if the Obama adminisration can announce better-than-expected enrollment figures on November 1, the political fallout from the website snafu could be minimal.

The Gallup poll is based on a three-day rolling average, though, so it could also be a case of public opinion lagging behind the news somewhat. There will likely be a raft of polls on the Healthcare.gov site later this week that will clarify the picture, but for now, the picture is rosier than expected for President Obama.