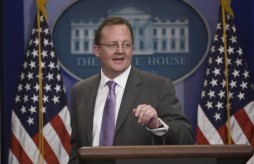 Here’s what working for an enormously popular (in terms of general good will, since Obama’s approval ratings have actually taken a hit of late) President gets you: a big target on your chest.

Over the weekend the Times ran a cool-ish profile of chief of staff Rahm Emanuel that noted, once again, his aggressive style, which is so at odds with the President’s (also that Rahm now likes puppies more than dead fish, and maybe didn’t qualify for a recent inner circle invite to Camp David because he hadn’t technically suffered through the campaign). Today at The Daily Beast, Lee Siegel is turning a sharply critical eye on press secretary Robert Gibbs. Blame the messenger!

Siegel complains that Gibbs is “smug, sardonic, and lacking in self-control as he slides into defiant, snide babble, rather than—at least you can respect it—terpsichorean evasion.” Utterly unlike his gentlemanly predecessor Tony Snow who was a gentleman. Also, gasp, Siegel says Gibbs is a dick to everyone.

It doesn’t matter whether a reporter is from ABC News or Fox News, Gibbs will sink to the occasion—he is as antagonistic to the former’s Jake Tapper as to the latter’s Major Garrett. Indeed, one of the most curious results of Gibbs’ Sarcast-athons is to create in both Tapper and Garrett identical facial expression while jousting with the press secretary: somewhere between stony and clenched, their professional pride ready to burst or pounce.

It’s hard not to read this as a compliment actually. In the sense that Gibbs is not playing favorites and is pissing everyone off equally (though Fox would have you believe otherwise), which at the end of the day is sort of his job.

“White House press secretaries are often chosen for the contrapuntal statement they make with regard to the president, even as they help project his identity,” says Siegel. Yes, and a lot of times that means expressing some of the anger and frustration the president is feeling but unable to personally disclose to the public. Or, in the case of Tony Snow, being “dignified, elegant and courtly” in the “face of a criminally stupid regime.” Though Dana Perino, who reflected fairly accurately at times the same criminally stupid regime, doesn’t really fit in to this stereotype.

Anyway, point being, Gibbs is the more aggressive face of the administration (just imagine if Rahm was giving the briefings) and rightly so. Furthermore, it’s probably not a mistake that Obama has surrounded himself with “perplexingly arrogant and thin-skinned” folk, someone needs to be pushing back, maybe it’s the press that needs a tougher skin.