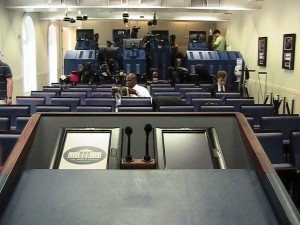 After months of speculation that mainly centered around a move into a senior advisory position within the Obama administration, White House Press Secretary Robert Gibbs confirmed that he will be stepping down as press secretary in February. But instead of a senior administration post, Gibbs is leaving the White House altogether, a development that has only recently been rumored. No replacement for Gibbs has been named, but Deputy Press Secretary Bill Burton is the heavy favorite.

Gibbs made the news official this morning, and President Obama gave a brief statement to The New York Times’ Caucus Blog:

Robert Gibbs, the White House press secretary and close confidante to President Obama, said Wednesday that he will step down and become an outside political adviser to the president and his re-election campaign.

Mr. Gibbs said that he intends to leave the podium in early February. His successor has not yet been decided, he said, but will likely be announced within the next two weeks.

President Obama, who is in the midst of making final decisions on the first major reorganization of his administration, said in a brief telephone interview on Wednesday that Mr. Gibbs would remain a close adviser and “will continue to shape the dialogue politically for many years to come.”

“We’ve been on this ride together since I won my Senate primary in 2004,” Mr. Obama said. “He’s had a six-year stretch now where basically he’s been going 24/7 with relatively modest pay. I think it’s natural for someone like Robert to want to step back for a second to reflect, retool and that, as a consequence, brings about both challenges and opportunities for the White House.”

Gibbs’ departure, as Jake Tapper notes, means that President Obama will soon be without his three closest advisers. Chief of Staff Rahm Emanuel left the White House to run for Mayor of Chicago, and David Axelrod will be leaving, as well, to work on President Obama’s re-election bid.

Update: President Obama has released the following statement on the departure of Robert Gibbs: (via email from The White House)

“For the last six years, Robert has been a close friend, one of my closest advisers and an effective advocate from the podium for what this administration has been doing to move America forward.  I think it’s natural for him to want to step back, reflect and retool.  That brings up some challenges and opportunities for the White House – but it doesn’t change the important role that Robert will continue to play on our team.”