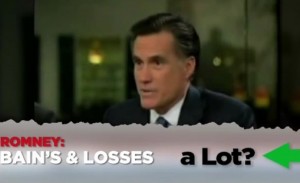 Priorities USA Action, the pro-Obama SuperPAC run by former Deputy White House Press Secretary Bill Burton, has released an effective new web video that highlights the ever-shifting number of jobs that Mitt Romney claims to have created as head of Bain Capital. The video is so effective, in fact, that it begs an obvious question: Why weren’t these clips included in the Obama campaign’s Bain ads?

“Mitt Romney and his team have been scrambling on these numbers as much as the varmint he enjoys hunting.

If he just released an accounting of the jobs gained and the jobs lost when he was at Bain, he could clear this whole controversy right up.

But no matter how you slice the numbers, tens of thousands of Americans lost their jobs so that Mitt Romney could make a profit. That’s not the kind of leader America needs.”

Despite the fact that almost every critic of the Obama campaign ads acknowledges that Mitt Romney made his record at Bain fair game when he claimed his tenure there demonstrates a knack for job creation, the media and weak-kneed Democrats have continued to insist that the ads are somehow “an attack on free enterprise,” and with little evidence, “not working.”

While it is frustrating that these folks obviously get the message, yet insist on misleading people about it, this whole mess could have been avoided if the Obama campaign had peppered its original Bain ad with a few of these revealing Romney clips:

The Obama campaign of 2012 is exceedingly well-organized and well-funded, but this is further evidence that the absence of 2008 veterans like Bill Burton, Robert Gibbs, and other members of that team who remained at the White House, is hurting the President’s reelection effort. Burton’s outfit has consistently out-messaged Obama For America, and even former President Bill Clinton, yet remain badly outgunned by Republican megabucks SuperPacs. If I had to choose where to put my million bucks to get Barack Obama reelected, I’d put it on Burton in a heartbeat.