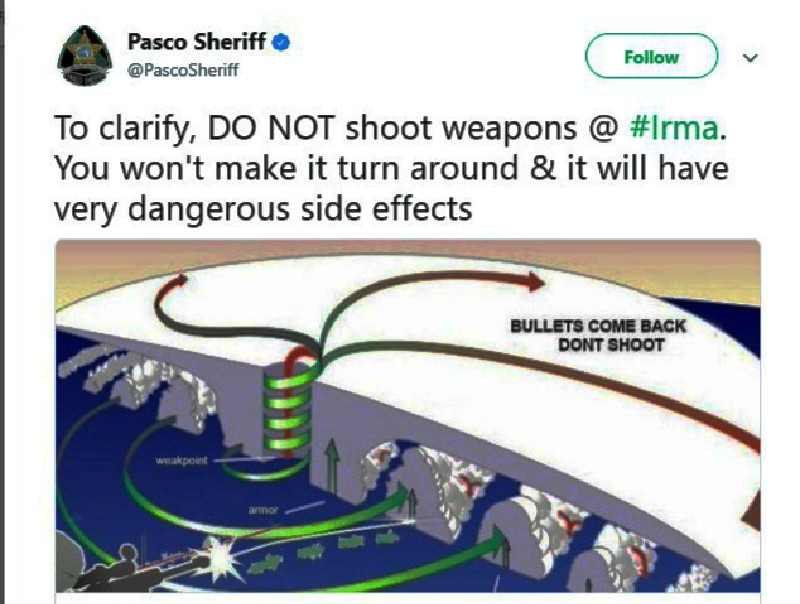 Yesterday, the Pasco County Sheriff’s office felt the need to take to Twitter to urge residents not to bust some caps into Hurricane Irma following a viral Facebook post by a Florida man calling for others to shoot at the storm.

On Friday, 22-year-old Ryon Edwards created a Facebook event called ‘Shoot at Hurricane Irma’ in which he said that folks needed to show Irma “that we shoot first.” Before long, the event took on a life of its own and over 50,000 people expressed interest in shooting at the hurricane, scheduled for Sunday at 10 AM.

To clarify, DO NOT shoot weapons @ #Irma. You won't make it turn around & it will have very dangerous side effectshttps://t.co/CV4Y9OJknv

Meanwhile, after the moment of truth arrived this morning, Edwards posted the following comment to the event’s Facebook page:

Well guys, it’s here. The moment we’ve been waiting for. It was cool to see the response this got from facebook. On another note, I’ve learned that about 50% of the world could not understand sarcasm to save their lives. Carry on.

When asked earlier why he created the event, Edwards said it was due to a “combination of stress and boredom.”