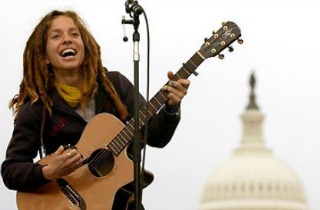 Feminist songwriter and liberal icon Ani DiFranco is the latest to be forced to don the scarlet letter of the 21st Century: “racist.” But that descriptor has become insufficient – far too few Americans still resemble the cartoonish bigots of antiquity that inhabit liberal imaginations. Today, the nondescript and malleable term “white privilege” is applied to anyone displaying racial thought deemed inappropriate by the self-appointed arbiters of such matters.

After bubbling up from the fever swamps of the blogs that document their every passing grievance (a Google search of reactions to this incident reveals hundreds of entries and will sap you of your faith in humanity), the still mildly respectable Salon has taken on the controversy surrounding DiFranco’s decision to host, and hastily cancel, a feminist retreat at the Nottaway Plantation in New Orleans. The outrage centers on the fact that the site housed African-American slaves prior to their liberation in the Civil War.

DiFranco, a true believer herself, folded the minute that her fan base began to roil with offense over the fact that sordid American history did, in fact, occur on that bit of Louisiana soil. But DiFranco’s retreat is not enough for Salon contributor Brittney Cooper. “That these places continue to represent sites of untold horror, violence, and humiliation for Black people is the very kind of knowledge against which white privilege inoculates,” she declared.

“The whole point of being white is that you are never supposed to feel uncomfortable in space,” Cooper’s following sentence reads. And lest you think she was making some form of analogy, it appears she was actually referring to outer space. “To the moon and back, the world is yours,” Cooper grieved.

Her take is echoed in places like The Huffington Post. Sure, DiFranco is apologetic, but not apologetic enough.

One gets the impression that DiFranco cannot possibly atone for her sin in the eyes of those who initially took offense, not because the sin is so great, but because the perpetually aggrieved are starving for a victory. Thiers is a movement that has lost a significant amount of credibility in 2013.

Their latest target, A&E’s Duck Dynasty star Phil Robertson, appears to be suffering no consequence for his offense to the sensibilities of the righteously wronged. Where just five years ago, the perpetually offended might have forced the network to jettison the whole show with the mere threat of a advertiser boycott, today there is no sting to the threats. They are simply ignored.

Well, this cannot stand. So the grievance industry attacks one of their own, precisely because it is a battle that can be easily won. DiFranco has folded, but her offense cannot be pardoned lest the perpetually offended acknowledge that they should, by all rights, accept her ostensibly genuine plea for forgiveness.

No doubt, some are genuinely offended by DiFranco’s choice of venues. They will bristle when confronted with the accusation that their indignation is not genuine. Of course, their outrage is honest. But it is also misplaced.

Racial injustice is a scourge that has, and probably always will, plague society. It is a historical constant, and identifying racial disparities and attempting to address them is a noble cause. But the smallness of today’s racial grievances, and the pettiness of those demanding redress, is doing that cause a disservice.