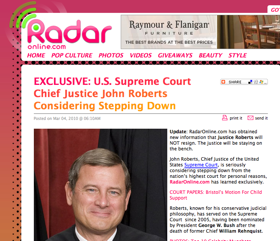 The gossip blog Radar Online released an exclusive report suggesting – complete with vagrant links leading to “Top Ten Celebrity Mugshots” and the Bristol Palin child support paperwork – that the resignation of Chief Justice John Roberts from the Supreme Court is imminent. It took about fifteen minutes (and denials from the few news sources quick enough to pick it up) for them to be forced into retracting the statement, but in exchange for some political credibility Radar won an all-important link on the Drudge Report and a small mention on Fox News, besides the internet wildfire of links all through the political blogosphere.

The report, dubious from the onset, suggested that Roberts had “personal reasons” to remove himself from the seat and that the blog “has been told that Roberts, 55, could announce his decision [to step down] at any time.” This could mean we are hours away from a new Chief Justice, or simply that in a few decades Roberts may choose to retire into the sunset after an extended term of service. Yes, Roberts could step down at any time. He could also die, go shopping, make a sandwich, or watch a movie.

Probably since “personal reasons” is so often a code phrase for “scandal,” Drudge put the link directly under the headline, leading publications from the Huffington Post (who pointed to a 2007 Time report on Roberts’ possible epilepsy diagnosis as a potential clue) to the Village Voice to pick up on it. Drudge responded by releasing a statement that his sources had denied it; Fox News also reported the rumors were false. The Radar report now stands with an update: “RadarOnline.com has obtained new information that Justice Roberts will NOT resign. The justice will be staying on the bench.” The post disappeared from Drudge and the alarm was cleared.

It’s an interesting move on the part of Radar, one that gave them, literally, their 15 minutes of fame. And it was completely successful: write an “exclusive,” completely false piece on something the blog has no expertise on and watch the links and hits roll in. Since no one goes to Radar expecting factual coverage of the Supreme Court, the fact that they are completely unreliable when it comes to their political coverage is irrelevant. Sure, next time they publish a political bombshell exclusive, no one will take them seriously, but their bread-and-butter stories on Brangelina and Tiger Woods remain unscathed.

Update: Sadly, the rumor was not a fabrication by Radar with the intent to get a ton of hits and media attention. Apparently, it all started in a Georgetown Law School classroom, where Professor Peter Tague was teaching his 1L class about the importance of reliable sources:

Today’s class was partially on the validity of informants not explaining their sources. [Professor Tague] started off class at around 9 am EST by telling us not to tell anyone, but that we might find it interesting that tomorrow, Roberts would be announcing his retirement for health concerns. He refused to tell anyone how he knew. Then, at around 9:30, he let everyone in on the joke.