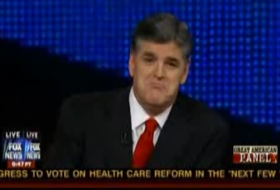 Juan Williams knows how to get under Sean Hannity’s skin. The liberal (for Fox News) commentator squared off last night on Hannity’s “Great American Panel” against the host, S.E. Cupp, and a confused Blake Shelton on Sarah Palin‘s popular appeal and despite his opposition to her political stances, Williams was honest enough to admit he sees her charm. While Hannity and Cupp made the point that Palin’s appearance with Jay Leno was another step forward on her personal road to the White House, Williams, addressing Hannity, noted that “clearly she’s a warm, attractive– and I know that you think extremely attractive– human being,” prompting a flabbergasted Hannity to reply “I think she’s smarter than Barack Obama!”

While the fact that Hannity would prefer a 2012 Palin presidency to the alternative is nothing new, watching him have to address this fact in the context of a schoolboy crush, and not a bitterly serious fight to the death with progressive socialism, is something we don’t see often. Cupp later tried to soften the blow by calling Williams’ description of Palin as “a centerfold for conservative men” sexist (her initial comment was just a pithy “ew!”), and Hannity tried to defend Palin’s political expertise, but Williams warned Hannity his “libido is getting in the way of your thinking.”

This prompted Hannity to defend his point by reminding Williams that he would prefer Palin as president to Obama today, and that Obama is slated to become an even worse president than Jimmy Carter.”You would trust her with our national security over Barack Obama?!” Williams asked. “Oh my God, you are really out there tonight.”

Perhaps the best part of this clip is the befuddled country singer sitting quietly in the corner, watching the others talk, sheepishly admitting when addressed that he finds Palin “cute” and shilling his album.