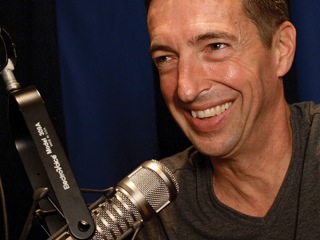 It’s not often you catch political pundits engaging in the equivalent of barroom brawls on live radio, but Florida conservative talk show host Ted Webb couldn’t help himself with guest Ron Reagan and promised the former first son a fair beating should they see each other in person for what he wrote about his father, President Ronald Reagan. The younger Reagan actually accepts, and it takes the intervention of co-host Jack Harris to bring down the temperature.

The fightin’ words were showcased on yesterday’s Glenn Beck radio program, as “Jack and Ted” are a member of the same syndicated family. Reagan was on the program to promote his new book when Webb found himself berating the former first son for his claims that, among other things, his father may have already been mentally impaired while in office. “If I were your brother Michael,” Webb threatened, “I would kick your ass for here to next Tuesday.” Somewhat unexpectedly, the typically mild-mannered Reagan responded “well, tell you what, Ted: next time you’re in Florida, I will drop by, and you can try to do that.” The conversation continued somewhat in this vein, though Reagan makes an attempt to return the conversation to his book. “I’m going to buy it when I get out of work,” Ted cedes, adding “sometimes we run out of toilet paper.” “You are such a little man,” Reagan shoots back.

Co-host Harris then interjects to “bring this back to some level of civility,” though by then Webb is shouting something about not getting “whipped by a ballerina” (a trade in which Reagan is educated. One wonders if Webb knows about Rahm Emanuel).

Glenn Beck and company, who play the clip, have a ball at Webb’s expense. “He’s like a steel worker,” Beck jokes, trying to put a finger on the altercation he just heard. Co-host Stu Burguiere adds, by way of some form of correction, “he’s a West Tampa Cuban.” Beck then tries and fails to keep the Reagan children straight, finally correctly stating that it’s Michael Reagan who is the “good one” (well, correctly relative to Beck’s ideological position). Perhaps not best to hold our breaths for Ron to be swinging by Beck’s radio show anytime soon.

The testy exchange on Florida radio (and Beck’s commentary on it) below: