Paul Shatters Dem. Monopoly On Romance And Captures The Hearts Of The Young Voter 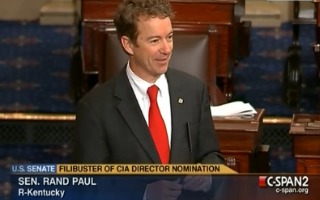 Much will be written about Sen. Rand Paul’s (R-KY) filibuster. It may be viewed through the prism of history as a turning point. It may be quickly forgotten as subsequent events diminish its relevance. Before Wednesday, however, Paul spoke for a narrow slice of the Republican Party’s coalition. Today, he speaks for a reinvigorated GOP base. But as the hours wore on, another phenomenon began to take shape – Paul’s ultimately unsuccessful efforts to rein in the president spoke directly to the forgotten millions of Americans wary of the ever-expanding scope of the unconstrained global war on terror. Paul offered himself up as something of a martyr. His voice, once lonely, grew in stature as his Republican colleagues – one after the next – shared his demand for redress from the White House, though all knew that would not be forthcoming. It was poetic. It was romantic. What may be most important, it reframed Congressional Republicans. All of the sudden, they were fighting for a cause with self-evident nobility that requires no public education campaign: life, liberty, and due process. In filibustering, Paul chipped away at the monopoly on romance that the left has enjoyed for more than a century.

The Republican Party’s consulting class has been beating their heads against the wall since well before the November election as they determine the best way to reach out to and convince young voters to consider the GOP’s programs. They are frustrated that their message of economic liberty, a check on the government’s power to confiscate wealth, and the preservation of America’s role as the guarantor of global security do not seem to resonate with the youth.

Too often, Republican officeholders and commentators give in to despair in the face of what at times appears to be an intractable problem. The least sanguine of them see the GOP’s inability to appeal to the youth vote as a terminal condition.

The political right has suffered from a romance deficit with the left for generations. The struggle against entrenched interests and insurmountable establishments has been the exclusive province of the left for as long as there has been an organized left. The young conservative, instinctively attracted to the struggle against perceived injustice, must always wrestle with and overcome their heart first in order to join the conservative movement. This is a fundamental impediment to the right’s ability to speak to the young voter.

Then a funny thing happened during President Barack Obama‘s first term. The president pursued the internationalist foreign policy ideals once limited to the nation’s university faculty lounges. He intervened in civil wars and sent American service personnel to the globe’s hottest and most forgotten battlefields of Africa. Obama embraced drone warfare with abandon. He violated sovereignty of many nations with manned and unmanned raids. Though the public understood that the interests of American national security were being pursued, the peace-loving American character was never comfortable with the concept of global warfare. The expansion of the president’s power to execute American citizens without due process does not sit well with the public, as evidenced by multiple recent public opinion polls.

Yesterday, Paul presented the left with an impossible conundrum: how can they support the president, the Democratic Party’s leader, when they do not fundamentally agree with him? Sen. Dick Durbin’s (D-IL) facile question to Paul in about the 12th hour of his filibuster, noting that Osama bin Laden posed an imminent threat to the United States even if he was not engaged in planning any attack on American interests, betrayed his support for Paul’s motives. Durbin’s was a perfunctory objection – his admiration for Paul’s efforts was written all over his face.

The Republican Party is, as are all successful political parties, a coalition of divergent groups with a variety of views on issues. One does not need to share Sen. Paul’s mistrust of American military interventionism — I certainly do not — to appreciate the monumental political shift his actions may presage. The public is hungry for a check on the executive, and Democrats are vulnerable on the sprawling drone warfare program.

Paul chipped away at the Democratic Party’s monopoly on romance yesterday. His actions broke through traditional firewalls that keep politics out of the homes of the nation’s marginally interested voters. He showed that the struggle for personal freedom is an idealistic pursuit. For a moment, the pervasive cynicism that has hardened voting patterns over the last two decades melted away. The political class will miss it, but the apolitical citizenry who could care less for what a consultant or a pundit says or thinks will not. The shift that Paul’s actions have ushered in will not remain imperceptible for long.