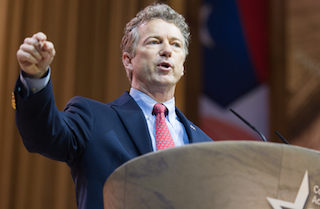 In two interviews Wednesday ophthalmologist Rand Paul (R-KY) warned the Obama administration not to “underestimate the transmissibility” of the ebola virus and doubted whether the U.S. should send its planned deployment of 3,000 troops to western Africa, where the disease has claimed thousands lives.

“You also have to be concerned about 3,000 soldiers getting back on a ship,” Paul said on Laura Ingraham’s radio show. “Where is disease most transmittable? When you’re in a very close confines on a ship, we all know about cruises and how they get these diarrhea viruses that are transmitted very easily. Can you imagine if a whole ship full of our soldiers catch Ebola?”

Per CNN’s Pentagon Correspondent Barbara Starr, the U.S. does not have a plan in place for soldiers who become infected while helping contain the virus in western Africa, though the Pentagon said that troops will not be coming into contact with infected patients.

“It’s a big mistake to downplay and act as if ‘oh, this is not a big deal, we can control all this,'” Paul said. “This could get beyond our control,”

Later on Glenn Beck’s radio show Paul warned of the virus infiltrating the United States via the U.S.-Mexico border, though it might have trouble finding room, what with terrorists running a shuttle service. Paul told Beck an insecure “border is not only a danger for national security purposes, it is also a danger for a world-wide pandemic should it occur.”