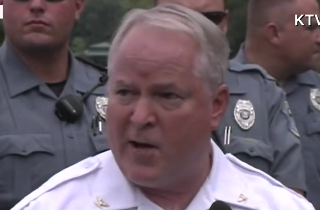 The DOJ today released the full report of their investigation into the police department of Ferguson, MO, widely criticized for the way they handled the death of African-American teenager Michael Brown, and the mass protests that ensued afterwards, and concluded that the department’s practices “have sown deep mistrust between parts of the community and the police department, undermining law enforcement legitimacy among African Americans in particular.”

The evidence they found demonstrating the Ferguson PD’s “intentional discrimination on the basis of race” included arrest statistics and a lot of racist emails. There were so many of these emails that the DOJ could only choose a few to demonstrate what kind of messages the Ferguson PD sent each other in their spare time:

A November 2008 email stated that President Barack Obama would not be President for very long because “what black man holds a steady job for four years.”

A March 2010 email mocked African Americans through speech and familial stereotypes, using a story involving child support. One line from the email read: “I be so glad that dis be my last child support payment! Month after month, year after year, all dose payments!”

An April 2011 email depicted President Barack Obama as a chimpanzee.

A May 2011 email stated: “An African-American woman in New Orleans was admitted into the hospital for a pregnancy termination. Two weeks later she received a check for $5,000. She phoned the hospital to ask who it was from. The hospital said, ‘Crimestoppers.’”

A June 2011 email described a man seeking to obtain “welfare” for his dogs because they are “mixed in color, unemployed, lazy, can’t speak English and have no frigging clue who their Daddies are.”

An October 2011 email included a photo of a bare-chested group of dancing women, apparently in Africa, with the caption, “Michelle Obama’s High School Reunion.”

A December 2011 email included jokes that are based on offensive stereotypes about Muslims.

And these weren’t the only emails they found. “Our review of documents revealed many additional email communications that exhibited racial or ethnic bias, as well as other forms of bias,” they wrote, adding that no one at the Ferguson PD was ever disciplined, or even called out, for their behavior:

Our investigation has not revealed any indication that any officer or court clerk engaged in these communications was ever disciplined. Nor did we see a single instance in which a police or court recipient of such an email asked that the sender refrain from sending such emails, or any indication that these emails were reported as inappropriate. Instead, the emails were usually forwarded along to others.