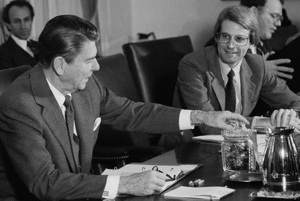 During his first term in office, President George W. Bush twice cut taxes as a means to spur a slowed economy. Since those cuts are set to expire (unless legislation is pass to extend them) by the end of the year, they’ve become a hot-button issue for the coming mid-term elections. During an interview broadcast on NPR’s Weekend Edition yesterday, former Budget Director David Stockman under Ronald Reagan revealed that he’s not only opposed to extending the Bush tax cuts, but he’s convinced that Reagan would never support extending them either.

Stockman, who still considers himself a staunch conservative and Republican, told host Guy Raz why he believes extending the tax cuts is akin to a bankruptcy filing by Congress and the White House. Roughly 10 days ago, Stockman contributed a column for the NY Times that outlined his position thusly:

IF there were such a thing as Chapter 11 for politicians, the Republican push to extend the unaffordable Bush tax cuts would amount to a bankruptcy filing. The nation’s public debt — if honestly reckoned to include municipal bonds and the $7 trillion of new deficits baked into the cake through 2015 — will soon reach $18 trillion. That’s a Greece-scale 120 percent of gross domestic product, and fairly screams out for austerity and sacrifice. It is therefore unseemly for the Senate minority leader, Mitch McConnell, to insist that the nation’s wealthiest taxpayers be spared even a three-percentage-point rate increase.

More fundamentally, Mr. McConnell’s stand puts the lie to the Republican pretense that its new monetarist and supply-side doctrines are rooted in its traditional financial philosophy. Republicans used to believe that prosperity depended upon the regular balancing of accounts — in government, in international trade, on the ledgers of central banks and in the financial affairs of private households and businesses, too. But the new catechism, as practiced by Republican policymakers for decades now, has amounted to little more than money printing and deficit finance — vulgar Keynesianism robed in the ideological vestments of the prosperous classes.

During his interview on Weekend Edition, Stockman reaffirmed his frustrations with both the GOP and the White House, and was asked by Raz where he called his ‘political home’ these days. “I’m in the – unwashed middle with more and more of the American people. And one of these days, I think the public is going to speak in no uncertain terms that we’ve had enough of this crony capitalism and that we’re going to have to now clean things up.”

One can listen to the interview in it’s entirety here, but a full transcript provided by NPR is included below:

This is ALL THINGS CONSIDERED from NPR News. I’m Guy Raz.

If the collapse of the financial markets in 2008 taught us anything, it’s that economics or rather economic forecasting is an art rather than a science. Some economists say the rest of this year will feel very much like a recession. And others aren’t so pessimistic. But this week’s jobless numbers and weaker than expected growth are playing into a debate here in Washington over tax cuts.

But before we get to that story, and it begins when David Stockman met President Reagan in 1981.

Mr. DAVID STOCKMAN (Economist): He was one of the, you know, greatest human beings I’ve ever met.

RAZ: In the early 1980s, Stockman became a kind of Washington wunderkind, the vanguard of a new type of economic thinking, supply side, deregulation, low taxes to stimulate growth.

As the White House budget director, Stockman was an architect of what would come to be known as Reagonomics. But a few years into the job, he became disillusioned.

Mr. STOCKMAN: The military budget got out of control and the tax cuts went to special interests as much as they did to the broad public.

RAZ: And he noticed a problem. The government wasn’t collecting enough money to cover its costs and he started telling that to Reagan.

Mr. STOCKMAN: As time passed, he was less and less enthusiastic about what I had to say.

RAZ: So, in 1985, Stockman left. Now these days, he’s still a conservative and still a Republican, but he doesn’t think his party is taking a responsible position on taxes any longer. At the end of this year, the Bush era tax cuts are set to expire. Republicans want them renewed, Democrats want to keep the tax cuts for the middle class but not for the wealthiest 2 percent of Americans.

Now, Stockman says they’re both wrong and he says extending either of those cuts is tantamount to the government declaring bankruptcy.

Mr. STOCKMAN: We’ve had a rolling referendum on what we want in government and what we don’t ever since the first Reagan spending cut program, which I was part of in 1981. And it seems pretty clear to me that by 2010, we’ve decided a lot of things that caused a lot of money, the American people won. I might not agree with that, but apparently they do.

So we’re spending $3.8 trillion in defense, non-defense, entitlements, everything else, and we’re taking in only 2.2 trillion. So we got a massive gap, you have to pay your bills. You can’t keep borrowing from the rest of the world at that magnitude year after year after year. So, in light of all of those facts, I say we can’t afford the Bush tax cuts.

RAZ: And I think many people will be surprised to hear Ronald Reagan’s former budget director make this argument. I mean, what happened to the idea you once pushed that tax cuts ultimately stimulate the economy?

Mr. STOCKMAN: I think that’s true. But we’re in a much different world today than we were in the early 1980s. We have had a spree of debt building for the last 30 years, both in the public and in the private sector. So in that environment, the highest priority is solvency now, not incentives for growth.

RAZ: You seem to suggest that many of our economic troubles are the result of Republican economic policies over the past few decades. You are a Republican. You are a conservative. Why do you think Republicans are largely to blame?

Mr. STOCKMAN: Because the Republicans abandoned their old-time fiscal religion in favor of two theories, which I think are now proving to be both wrong and highly counterproductive and damaging.

One was monetarism, which said let the dollar float on the international markets. Let 12 men and women at the Fed decide whether to raise or lower interest rates and use the Fed to try to run this massive economy. What they’ve done instead is run the printing press, they’ve flooded the world with dollars. The whole monetarist policy has been a mistake.

By getting off track over the last 30 years, the Republican Party has basically given out its historic view that the key thing was financial discipline, financial responsibility and that we had to live within our means. Today, we have two free lunch parties, and as a result, we’re borrowing ourselves into grave danger with each passing month and year.

RAZ: Now, Republicans, David Stockman, in the Senate led by, obviously, the Minority Leader Mitch McConnell, they say they’re simply following, you know, the Reagan philosophy of supply-side economics, a policy that you pushed. Do you think they’re being disingenuous?

Mr. STOCKMAN: Utterly disingenuous. I find it unconscionable that the Republican leadership faced with a 1.5 trillion deficit could possibly believe that good public policy is to maintain tax cuts for the top 2 percent of the population who, after all, have benefited enormously from this phony boom we’ve had over the last 10 years as a result of the casino on Wall Street.

And I blame Paulson on it. I blame the Bush White House. They basically sold out the birthright of the Republican Party when they bailed out Wall Street unnecessarily in a state of complete panic in September 2008. That’s really, at the end of the day, one of the greatest misfortunes in fiscal governance since the Reagan revolution tried to straighten things out beginning in 1980.

RAZ: Do you hold President Obama and his economic policies responsible for some of this growing deficit?

Mr. STOCKMAN: Absolutely. The only thing worse than a Republican leadership position is that of the White House. I don’t know how they think they’re helping the economy by every month coming up with a new plan to borrow tens of billions more, drive us deeper into debt. Never in history has anyone said that for very long, you can sustain a circumstance where the debt is growing at twice the rate of the economy.

So, I think the White House with the stimulus is totally wrong. A lot of it has been wasted. Why did they put all that money in the automobile industry? There’s far too much capacity already. Why did they waste the money on the housing credit? Why are they continuing to try to pump money into state and local governments? I understand there’s a severe budget pressure there, but the federal government is in deeper debt than the state and local governments.

But in the end of the day, I would say Obama is really wrong when he says I’ll extend the Bush tax cuts except for the top, you know, 2 percent, above 250,000.

RAZ: In other words, you’re saying he has to not just end the tax cut for the top 2 percent or 1 percent of Americans, but the middle class, the so-called middle class tax cuts as well.

Mr. STOCKMAN: Absolutely. The tax – the Bush tax cuts costs $300 billion a year, 100 billion to the top 2 percent, 200 billion to the middle class. So, I ask the White House, why is $175,000-a-year family going to be given a tax break that we can’t afford, a large tax reduction, tens of thousands of dollars a year? To me, it makes no sense.

RAZ: I wonder, David Stockman, where is your political home these days? I mean, where does somebody like you go?

Mr. STOCKMAN: Well, I don’t know. I think I’m in the – unwashed middle (unintelligible) with more and more of the American people. And one of these days, I think the public is going to speak in no uncertain terms that we’ve had enough of this crony capitalism and that we’re going to have to now clean things up.

At some point, we’re going to either be forced to do it by the global bond and currency markets or the American people are going to wake up and demand it through an election that really cleans house in terms of both parties and the irresponsible behavior that each of them engages in today.

RAZ: That’s David Stockman. He was the director of the White House Budget Office under President Ronald Reagan and is widely credited as the architect of Reagonomics.

David Stockman, thank you so much.