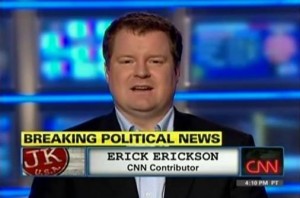 With Herman Cain‘s days as GOP frontrunner looking to expire like a carton of used milk, movement conservatives are starting to panic at the looming prospect of a Mitt Romney nomination. That prospect is so terrifying that Redstate editor-in-chief Erick Erickson felt compelled to deliver a blistering dose of reality to the base that includes a Team Obama-worthy assessment of Romney, a curt dismissal of the Newt Gingrich buzz, and a quasi-endorsement of (gasp!) Jon Huntsman.

If the conservative base is feeling a little apocalyptic about their presidential prospects, Erick Erickson is the Pale Rider, and his spooky agreement with President Obama’s political horsemen is the Seventh Sign. Tell me if this criticism of Mitt Romney sounds a bit familiar:

Mitt Romney, on the other hand, is a man devoid of any principles other than getting himself elected. As much as the American public does not like Barack Obama, they loath a man so fueled with ambition that he will say or do anything to get himself elected. Mitt Romney is that man.

I’ve been reading the 200 pages of single spaced opposition research from the John McCain campaign on Mitt Romney. There is no issue I can find on which Mitt Romney has not taken both sides. He is neither liberal nor conservative. He is simply unprincipled. The man has no core beliefs other than in himself.

Even Bill Burton, who has been beating Romney like a bowl of egg whites for months, is probably shaking his head saying, “Too mean!”

The real takeaway from Erickson’s screed, though, is his takedown of Newt Gingrich. Since the Cain scandal broke, Gingrich’s inch up the polls has created some buzz that he might be the next candidate to take a ride atop the GOP Ferris wheel. Erickson disposes of that notion like it was a second marriage:

Newt Gingrich will not be the nominee because, despite his daughter’s rebuttals to the horror stories of how Gingrich divorced his first of three wives, Jackie Gingrich told theWashington Post on January 3, 1985, “He walked out in the spring of 1980 and I returned to Georgia. By September, I went into the hospital for my third surgery. The two girls came to see me, and said Daddy is downstairs and could he come up? When he got there, he wanted to discuss the terms of the divorce while I was recovering from the surgery.”

Gingrich went on to cheat on the second wife with the third. Regardless of the actual facts or even the spin, he won’t win women.

What’s important here is the kind of influence that Erickson exerts with movement conservatives. There are lots of pundits who claim influence, mostly by telling their audiences what they want to hear. Erickson has real influence, extensive mailing-list influence, and he can tell conservatives what they need to hear without fear of being branded a RINO. If he tells them to forget Gingrich, a lot of them will forget Gingrich, no matter how feverish their love for him.

Is Erickson’s influence enough to save polling blip Jon Huntsman? He finishes his piece with a backhanded pseudo-endorsement of the former Utah Governor and Obama appointee, saying, “I’m starting to think I need to walk it back on my rejection of Jon Huntsman. Because I’m starting to think even he would be more faithful in his conservative convictions than Mitt Romney.”

Huntsman is going to need a lot more help than that, but Erickson is absolutely right, even if he’s horribly late to the party. The buzz in the White House a year ago was that Huntsman was the candidate who would give President Obama the most trouble.

That was before Huntsman’s candidacy was exposed to the disinfecting sunlight of an actual primary campaign, when a series of conservative fever dreams (Sarah Palin, Donald Trump, Michele Bachmann, Rick Perry, Herman Cain) overtook the reality of beating the President. Erickson has woken up, but I don’t know if there’s a strong enough cup of coffee to get the Republican base to vote for Jon Huntsman.