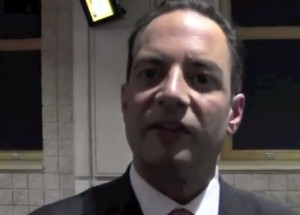 Rep. Todd Akin (R-MO) angered many Republicans when his “legitimate rape” remarks exposed their party’s extreme views on abortion, and kept them in the spotlight by ignoring calls for him to bow out of the US Senate race in Missouri. The political press, however, has been speculating that once Akin’s chance to drop out has passed, pragmatism will dictate that the GOP support Akin in order to gain a seat. On Monday, RNC Chairman Reince Priebus promised conservative bloggers that would not happen.

Akin’s comments have been disastrous for the Republicans, exposing an apparent rift on abortion policy in the presidential ticket, thrusting the vice-presidential nominee’s support for “forcible rape” language in federal law into the spotlight, and getting the media to finally notice that the party’s view has long been that there should be no exceptions on abortion for rape and incest.

Despite some initially encouraging poll numbers, Akin has fallen well behind incumbent Sen. Claire McCaskill in the polls, but even if he manages to close the gap, the embattled Congressman can’t count on his party to help him move them closer to a majority in the Senate. With palpable pique, Priebus explained, to conservative bloggers at the Republican National Convention in Tampa, that Rep. Akin was passing up a chance to put his country first. From Redstate.com:

The question is: “If he stays in, is your position eventually going to change? Are you going to have to support him? The Chairman replies “No, no. No. He could be tied. We’re not going to send him a penny.” That’s a pretty definitive answer. Priebus also states that stepping aside from the race and letting someone with a better chance of winning step in would be “putting [the] country first,” and implies that stepping aside is what someone would do if they “really did believe this is about liberty and freedom and the future of this country.”

That hypothetical may never be tested, as Akin’s polling numbers are decaying faster than Osama bin Laden’s eye socket, but Priebus’ decision to answer the question at all is significant. There’s a flack maxim (a flaxim™) which says you get an automatic pass on any question that you can reasonably call a “hypothetical,” meaning that Chairman Priebus really wanted to send a message: Abandon All Hope, Ye Who Defy The Party.

Here’s the clip, via Redstate: