Remember When Rosa Parks Drove a Car Into a Ditch? 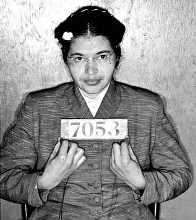 Neither do I, but a host of conservatives, like Glenn Beck, apparently do. They have re-cast President Obama‘s back-seat placement of the GOP in his “car in the ditch” metaphor as a reference to Rosa Parks‘ historic act of civil disobedience. Twice during his radio show, Beck attempted to invent context, while some conservative blogs followed suit.

If you actually read what the President said, however, none of this makes any sense, so why all the gymnastics? It’s part of a longstanding effort by some of the President’s opponents to cast him as a “reverse racist,” while simultaneously attacking him with race.

Here’s Beck morphing the President’s quote, and pleading to know why Republicans have to sit in the back:

It’s really quite simple, Glenn. In this metaphor, you’re not Rosa Parks, you’re the guy who not only can’t drive, but who messes with the radio knob, never shuts up, and just might give the steering wheel an untimely yank. So, yeah, sit in the back until you get your license back.

Ironically, one of the earliest and most enduring such race-related attacks has to do with Obama’s reference to his grandmother as a “typical white person” following his 2008 speech on race in America. The remark is cited to this day as an example of the President’s supposed racism, but here’s what he said:

“The point I was making was not that my grandmother harbors any racial animosity, but that she is a typical white person. If she sees somebody on the street that she doesn’t know (pause) there’s a reaction in her that doesn’t go away and it comes out in the wrong way.”‘

He was candidly discussing the same reflexive prejudices that the right now lauds Juan Williams for addressing.

Not all conservatives are on board with the Rosa Parks smear, however. From Hot Air:

I know Drudge and Fox are having fun with The One saying at a rally that the GOP needs to “sit in back,” as if it was some sort of veiled Rosa Parks allusion, but I think he’s getting a bad rap on that. That’s just part of his dopey car metaphor: We can’t let Republicans drive because they’re the ones who steered the car into the ditch, yadda yadda, so now they need to ride along as passengers while the Dems steer for awhile… I don’t think he means anything racial in it at all; “great communicator” that he is, he’s just stretching this already exhausted metaphor to its breaking point. Good luck convincing Megyn Kelly of that, though.

They also point out that, just as I suspected, the “back seat” part of the story isn’t actually new.