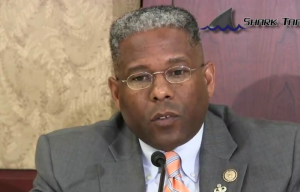 Regarding his original comments, West said, “No, I don’t regret it whatsoever.” He went on to imply that Wilson was a communist who hid behind the label “progressive”:

Those in the media, he said, “should do a little research.” West went on to discuss how there’s a “very thin line” between communism, progressivism, Marxism, and socialism:

“It’s about nationalizing production, it’s about creating and expanding the welfare state. It’s about this idea of social and economic justice. And you hear that being played out — you know, now with fairness, fair share, economic equality, shared sacrifice, ad nauseum, ad infinitum.”

West said he welcomes anyone to debate him. Asked whether he genuinely thinks his opponents support extreme/radical philosophies, West emphatically replied, “I just went down the line and gave you examples of legislation.”

“I’m not gonna back down, I’m not gonna be afraid about the fact that I call a spade a spade,” he said. “That’s my responsibility to the American people.”

Take a look at West’s comments: