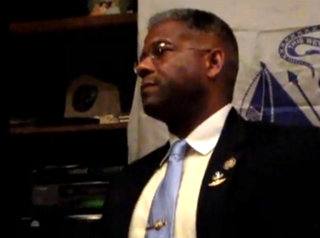 21st century feminism is a difficult thing. With women at the forefront of politics and closer to equal footing than they were decades ago, pointing out gender for gender’s sake without coming off as misogynistic has becoming fairly difficult. But here’s a vivid example of how not to be a feminist. In a speech this week, GOP Rep. Allen West encouraged women to follow the “Spartan” model: “it is Spartan women who raise Spartan men.”

Rep. West, a Republican and Tea Party darling, most recently made a splash in the headlines for calling President Obama a “low-level socialist agitator” and “third-world dictator.” He has made his name on saying bold things that rile up the right-wing base because they boldly echo sentiments that other attempt to articulate with some nuance. He didn’t seem to be out to make any bold statements at a Women Impacting Nation conference he attended this week, however, but instead simply meant to encourage the women there to get involved in the political process. The Right Scoop has the relevant part of the speech, praising Rep. West for speaking without fear of being misconstrued as a misogynist:

But when you understood what made the Spartan men strong, it was the Spartan women. Because the Spartan women at the age of nine gave up their male sons. And their male sons went into a training that was called the Agoge and they stayed in that training for the next eleven to twelve years. And when they were finally qualified, when they were finally ready to join the ranks for the Spartan army, it was not their father who gave them their cloak and shield. It was their mother who gave them their shield. And when the Spartan mother gave that young Spartan warrior his shield, she gave him this basic commandment: “Spartan, here is your shield. Come back bearing this shield or being borne upon it!”

When Queen Gorgo, wife of King Leonidas, was questioned by the Persian emissary and she somewhat spoke out of turn to this Persian emissary, he tried to rebuke her. And she looked at him and said “Persian, beware, for it is Spartan women who raise Spartan men.”

I hate to go all Simone De Beauvoir on what was clearly intended to be an uplifting, feminist statement, but this speech dog-whistles so many of gender-orthodoxy talking points that they are worth addressing individually. No, chances are Rep. West is not a misogynist, nor did he intend to imply any gender-based superiority. He may not even realize how what he suggests promotes a status quo that undervalues women. But several implications here certainly further the latter.

Spartan women were progressive for their era. They were trained as soldiers– though never saw battle– because the Spartans believed that only a healthy, battle-ready womb could engender the best of warriors. Given their record against the Athenians, who were too busy waxing philosophic to bother paying any attention to the ladies, they were probably right. But ultimately, Spartan society existed for the benefit of the male. He was considered the centerpiece of culture, and women only received the “benefits” of battle training because it was impossible for Sparta to have the best soldiers without them. Women did not have any inherent value.

Return to 2011 A.D. and, suddenly, what was progressive for 430 B.C. doesn’t feel quite as applicable. Applying Spartan values to today’s society, women would not be able to participate in the military– or politics. Sarah Palin wouldn’t be allowed to speak, though she would be learned in politics– but only in order for her to raise more learned male children. The adage “it is the Spartan women who raise Spartan men” encourages a society where women are but peripheral to the advancement of men, not a society where women are an end to themselves. Rep. West probably wants the “Spartan” women of American to participate in the political process as much as men do, because following his statements to their logical conclusion that women must train themselves for the good of men would be perfectly unfair when he said these words in a feminist conference he chose to attend. But the argument still stands.

This claim, however, is more theory than practice. In practice, Rep. West’s words propose that the paradigm of mother as caretaker and father as breadwinner be taken at face value. Strong women are to raise strong men– strong women are not just to be, the way strong men are. Nowhere does Rep. West note that it is Spartan men who raise Spartan women; of course they didn’t. But it is (or at least should be) the American man who raises the American woman, at least as much as the reverse is true.

The importance of that last bit is impossible to exaggerate in a society like America’s that sees so many children grow up in fatherless homes. There is no “deadbeat mom” epidemic in America– encouraging women to raise their children does nothing but implicitly excuse men who refuse to participate in their children’s upbringing, because that’s a woman’s job. That the woman should be self-sufficient to do so expressly for the benefit of the male son does not excuse males from not participating. What’s more, women do not, by and large, need encouragement in being strong mothers the way many men need to be told that being a man is being a father. They need encouragement in being strong human beings who finish their studies and rise in their companies’ ranks for their own benefit, and not for the benefit of fathers, husbands, or sons.