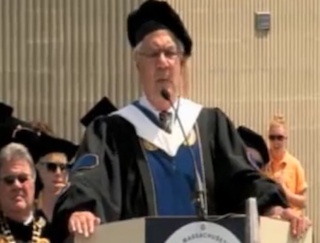 While speaking at the University of Massachusetts Dartmouth undergraduate commencement, Congressman Barney Frank made a provocative Trayvon Martin joke that stunned the audience. Frank made the controversial remark while he was referring to Hubie Jones, who was an African-American recipient of an honorary doctorate.

“One of the great men that I’ve worked with Hubie for many years and I’m particularly pleased that Hubie got an honorary degree today. You know, when you get an honorary degree they give you one of these and Hubie, I think you now got a hoodie you can wear and no one will shoot at you.”

WCVB-Boston reports that audience members gasped at Frank’s joke, “I think you’ll feel, I hope, pretty protected by that,” he added.

The report went on to say that Jones defended Frank, saying he didn’t believe Frank made the joke to offend people.

“I don’t think he meant to be mean-spirited,” said Jones. “We do have a problem in this country. It came out at a time and occasion where it was a surprise. But you know Barney.”

Frank doubled down on the inflammatory joke in a statement, according to WCVB in Boston:

“I have used the ‘hoodie’ line to ridicule the notion that a hooded sweatshirt is somehow sinister,” he said. “I wore a hooded gown in three ceremonies earlier this year, and in my remarks at those events I used the same joke on myself.”

Watch the report about the incident from WHDH-Boston below: