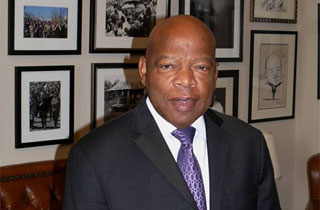 Civil rights icon and Congressman John Lewis (D-GA) believes that Ferguson is a “turning point” for the modern civil rights movement, and that the nation will see massive protests if a grand jury does not indict Officer Darren Wilson in the death of 18-year-old Michael Brown.

While appearing on Roland Martin‘s radio show, Rep. Lewis was asked whether the numerous stories of African-American men being shot by police — Brown’s death chief among them — was “the modern-day Selma”, referring to the 1963 march that saw hundreds of protestors beaten and arrested for demanding African-American voting rights.

“I believe what is happening is moving towards that point,” Rep. Lewis mused:

Selma was the turning point. And I think what happened in Ferguson will be the turning point. I think people are waiting, they’re watching, and we’re gonna see within the next few days what’s going to happen — and that would be massive, nonviolent protests all over America. When we were beaten on that bridge in Selma, people couldn’t take it, for they saw it, they heard about it, they read about it, and it lit a sense of righteous indignation. When we see a miscarriage of justice in Ferguson, they’re going to have the same reaction they had towards Selma.

And he should know, he was there and played a key role in the pivotal march.

Rep. Lewis also advised protestors to pace themselves: “Be like a pilot light and not like a firecracker. A firecracker just pops off and it’s gone. A pilot light will continue to burn.”

The grand jury report is expected soon, and Missouri Governor Jay Nixon declared a state of emergency yesterday in anticipation of possible riots.