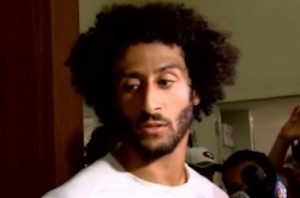 Because of his National Anthem protests, Colin Kaepernick has unquestionably been the most talked-about player in the NFL over the course of the 2016 season, despite the fact that he hasn’t actually played yet. But that may soon change.

The current starter, Blaine Gabbert has underwhelmed through the first quarter of the season. The 49ers have lost three straight games with Gabbert under center, and Gabbert’s stat line is underwhelming too. He’s completed just 58% of his passes, and thrown four touchdowns and four interceptions.

All of which has led to the speculation about Kaepernick taking over the job he once had as the 49ers QB1. For the moment, 49ers head coach Chip Kelly is backing Gabbert, defending his quarterback’s performance after the 49ers lost to the Cowboys on Sunday.

Though Kelly may not be ready to pull the trigger on a QB switch, he is strongly in favor of having Kaepernick on the team, according to Bleacher Report. The site reports that 49ers general manager Trent Baalke wanted to cut Kaepernick before the start of the season, but Kelly strongly opposed Kaeprnick’s release.