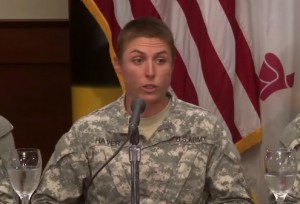 A new report in PEOPLE Magazine claims that the graduation of the United States Army Ranger School’s first two female cadets was rigged from the start.

According to PEOPLE‘s Susan Keating, the graduation of First Lieutenants Kristen Griest and Shaye Haver was a heavily politicized event, even before the possibility of their ever graduating from the school became a reality in August. The news comes just days after Rep. Steve Russell (R-Oklahoma) requested documentation relating to the matter from the Department of Defense over concerns that “the women got special treatment and played by different rules.”

Multiple unconfirmed sources told Keating that an unnamed general told subordinates that “a woman will graduate Ranger School” back in January. “At least one will get through,” he concluded at the time.

“Even though this was supposed to be just an assessment, everyone knew” another source told PEOPLE. “The results were planned in advance.”

Among other things, the sources revealed that female entrants were sent to a special two-week training program to help prepare from for Ranger School. Unlike the male students, the women were allowed to repeat the program until they passed. They were also given individual nutritional counseling.

During their time at the Ranger School, women were given previews of certain parts of the course that men would only see once they were tested. They were also pulled out of difficult portions, like patrols, and allowed to repeat them. Men were not allowed to do the same.

Since the story broke Friday morning, the U.S. Army refrained from issuing an official comment until Saturday. The U.S. Army Chief of Public Affairs, Malcolm B. Frost took to Twitter to refute PEOPLE‘s claims, calling them “pure fiction”:

The latest attack on the integrity of the United States Army by PEOPLE magazine’s Susan Keating is more than inaccurate, it is pure fiction.

@KatePeople @Malcolm_Frost (2/2) my requests to speak to Ranger Instructors, cadre, and medics alone and without fear of retribution.

@Malcolm_Frost @KatePeople Gen Frost, your subordinates know that I asked to speak to the leadership, and more importantly, the RI’s. — Susan Katz Keating (@SKatzKeating) September 26, 2015

@Malcolm_Frost @KatePeople Repeatedly. Ask Gary Jones. Ask his replacement and LtCol Garrett. And when can I talk to the RI’s, cadre, medics

@Malcolm_Frost @nweisenseeegan @KatePeople You called us out for not talking to a commander who refused to speak. (1/2) — Susan Katz Keating (@SKatzKeating) September 26, 2015