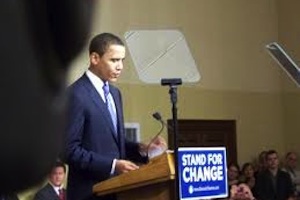 In case you haven’t heard, the country is trillions of dollars in debt and everyone’s saying we need to make huge cuts to get back on track. Republicans haven’t been happy with the President’s budget that came out this week and have been making numerous suggestions on what we should be cutting instead. One of them had a rather interesting idea. Yes, Arkansas’ Rep. Steve Womack actually filed an amendment to cut President Obama’s teleprompter budget. Nice.

“Womack told Fox News Tuesday afternoon that he pulled his amendment because he wasn’t able to get an estimate on how much it would save.

‘I think we made our point,’ Womack said. ‘We’re asking people to do more with less. And I think the president ought to lead by example. He is already a very gifted speaker. And I think that’s one platform he could do without.'”

Now, if you’ll allow me to digress a bit, I’d like to tell a little story. Back in third grade, my class got its own class pet, a little hamster. My teacher decided that we should all vote on what to name it. To start, she allowed us all to write down suggestions and put them in a box so that she could read them aloud. I told the boys sitting next to me that we should suggest “Buttface.” They all thought it was hilarious and told me I had to do it. I did. It was almost read. Everyone laughed and I had to stay in during recess.

So, why did I tell this story? Because, I’m pretty sure this is basically how this proposal came together; with a lot of giggling, snickering, and at least a couple double-dog dares.

So, congratulations, Mr. Womack. You got your Buttface in there. Everyone did have a good laugh. However, I will warn you, it still won’t get Allison McCallister, the cutest girl in class, to notice you.