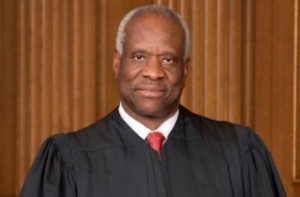 The Smithsonian African American Museum opened earlier this year, but Republicans are calling the Smithsonian out for the “omission” of one important conservative figure in American black history.

Supreme Court Justice Clarence Thomas is not in the museum, and this led to a lot of outcry and a petition months ago. The museum responded at the time by saying they cannot tell “every story” in the space they have, and Republicans in Congress recently wrote to the Smithsonian asking why Thomas was omitted.

Well, now Republicans in both the House and Senate have introduced resolutions calling out that very omission:

Proud to introduce a resolution with @PeteSessions calling on the Smithsonian to appropriately honor Justice Thomas https://t.co/pedMFQbeBq

Here’s part of what Congressman Buddy Carter had to say about the omission:

“Justice Thomas’ exclusion from the National Museum of African American History and Culture is a tragedy. In a museum designed to highlight American values like resiliency and optimism, Justice Thomas’ background and accomplishments should be highlighted as a representation of overcoming adversity to reach great heights. It is a disservice to his legacy and to the history of this nation to mention his name in a single caption, but provide no exhibit sharing and preserving his remarkable story and critical contributions to our judicial system. Justice Thomas’ contributions to America, his unique life story, and strongly held convictions should be shared and celebrated and I will not give up until the Smithsonian properly recognizes and shares this important part of history.”