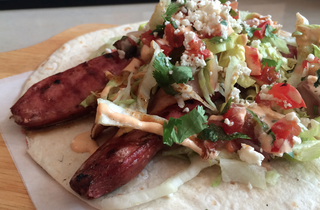 A Cincinnati restaurant came under fire yesterday for a hot dog it introduced called the “Bruce Jenner 2.0.” The dish was announced prior to Jenner’s big ABC News interview, in which he identified himself as a woman and talked about struggling with his sexual identity.

The Senate Pub reportedly has a reputation for celebrity and current events-themed dishes, but the hot dog went too far for some people. The dish is, as it was described, “part hotdog, part taco, and it’s awesomeness.” The hot dog on the dish is cut in half. It’s not exactly subtle.

Some members of the community and trans advocates were outraged, with even one city councilman expressing his discomfort. The restaurant owner said that they did this because they really believed Jenner was doing an awesome thing:

“We think that Bruce will influence countless others who might not of [sic] felt brave enough to do so in the past. We fucking love the LGBT community. (The hot dog) is exactly what we said it is. Pure awesomeness.”

They’re reportedly planning to give the proceeds made from the dish to a charity for Leelah Alcorn, a transgender girl whose tragic suicide received lots of national attention a few months ago.