Rex Tillerson: My Wife Convinced Me To Be Secretary of State, ‘I Didn’t Want This Job’ 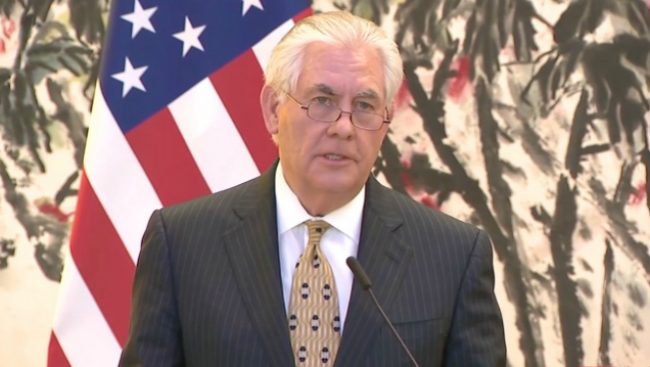 Secretary of State Rex Tillerson said in a new interview that it wasn’t his idea to become America’s top diplomat, and he was “stunned” that President Trump offered him the job.

“I didn’t want this job. I didn’t seek this job,” Tillerson said. “My wife told me I’m supposed to do this.”

Tillerson offered his remarks as part of a wide-range interview with Independent Journal Review (IJR), the only outlet that joined him during his recent trip to Asia. Tillerson also used this interview to address the criticisms against him for not bringing the rest of the press pool to Asia, saying “I’m not a big media press access person. I personally don’t need it.”

The former Exxon Mobil CEO explained that he originally planned on retiring to his family’s ranch this month, and that he only met Trump after the real estate mogul won the 2016 election. Tillerson said Trump made him an offer during a White House transition meeting they had together, and Tillerson said he wasn’t sure what he would do until he spoke about it with his wife, Renda St Clair.

“My wife convinced me,” Tillerson said. “She was right. I’m supposed to do this.”