Rick Sanchez’s Explosive Interview With Carl Paladino: “Where In The Hell Did You Get That!”
video

Rick Sanchez’s Explosive Interview With Carl Paladino: “Where In The Hell Did You Get That!” 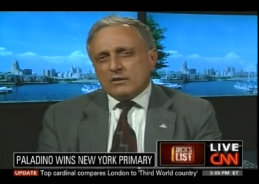 Meet your new GOP nominee for Governor, New York! Behold, Carl Paladino, who will presumably ensure that we no longer have to worry about being left behind when it comes to nutty politicians who will say anything. Paladino’s day-after victory rounds made a stop by Rick Sanchez‘s show this afternoon and the results were…eye-opening. Fireworks might be the best way to describe the interview.

Let’s just jump right in with Imam Rauf and the proposed Lower Manhattan mosque. Paladino is, naturally, against the mosque. In fact, he says he has evidence Imam Rauf wanted to bring Sharia law to America and implement it here and “that’s not kosher for us.” To Rick Sanchez‘s everlasting credit he stopped Paladino at this point to tell him that it was “his job to be correct” and this was “not about interpretations it is about facts.” And there is a big difference! Not to Paladino. He apparently told people (i.e. voters) that the Imam belonged to a sect of Islam that believes people who don’t follow it should be killed. Says Rick Sanchez: “Where in the hell did you get that!” Paladino says he has “read reports.” Furthermore, Paladino thinks that the reason President George W. Bush placed his faith in Rauf as a Muslim ambassador is because Bush “was human” and humans make mistakes.

It was at this point the interview got a little nutty. Sanchez switched gears and asked Paladino if he’s not taking the “politically correct” route because it’s “easy to beat up” on Muslims in the U.S. right now, and Paladino responded that he is never politically correct and that he considers Ground Zero to be anywhere the cloud of dust containing human remains landed. So someone should probably put Brooklyn Heights on alert.

You can watch the clip below. While doing so perhaps consider that Paladino is not some loony congressional candidate but the man running for Governor of New York. Perhaps most troubling however, beyond Paladino’s total disregard for things like the Constitution, is that by pegging himself the anti-establishment candidate who answers to no one, antagonistic interviews such as these — where the interviewer does his job and asks the hard questions and points out the inconsistencies and the candidate gets belligerent and refuses to answer them — actually just strengthens his position with the people who thought it a good idea to vote for him in the first place. Welcome to the Tea Party New York.