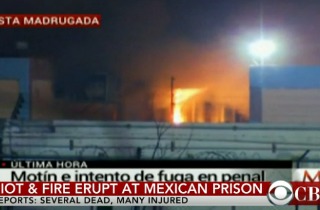 A battle between rival prison gangs had explosive consequences at a Northern Mexican prison in Monterrey, where at least 52 people were killed while 12 others were hospitalized.

Nuevo Leon state Governor Jaime Rodriguez announced the news alongside other officials at a press conference this morning, where he outlined the 2.5-hour dispute that rocked the facility last night. The fight apparently occurred due to conflicts between the Topo Chico and Zetas gangs, members of which were serving time along with other drug cartel factions at the detention center.

Rodriguez acknowledged that the situation was a tragedy, but the BBC reported that he also said the prison was now under control, that no gunfire had occurred, and that no one escaped during the mayhem. Even so, large crowds have assembled outside the prison gates, with local media demanding updates and inmate family members asking for information on the injured.

It has yet to be seen whether this will affect the travel plans of Pope Francis, who planned to visit a border prison in Ciudad Juárez tomorrow despite the city being a known hotbed of drug violence and criminal activity.

Watch a report on the story in the video above, via CBS.