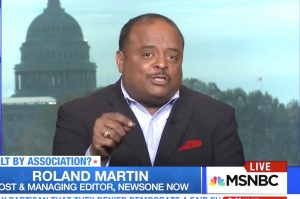 Roland Martin recounted his interview with white nationalist leader Richard Spencer, in which he told the “alt-right” luminary, who has lobbied for the creation of a white ethno-state in the U.S., that he was free to leave the country “anytime he wants to.”

Hall countered that Spencer’s position was for minorities to voluntary leave the country. Martin responded, “Well, I told him he can leave. He can leave anytime he wants to.”

Spencer is the founder of the National Policy Institute, a Virginia-based white nationalist think tank that lobbies for the creation of a white ethno-state in the U.S. Spencer told the BBC in September, “Donald Trump came along and I feel like my movement and ideology, we can be a kind of vanguard for a presidential candidate. His arrow is pointing in our direction.”

Martin said that Trump had been “speaking to white nationalism” throughout the campaign. “This is all by design. President-elect Donald Trump must condemn it. He must say it is shameful. But he’s paying footsie here.”