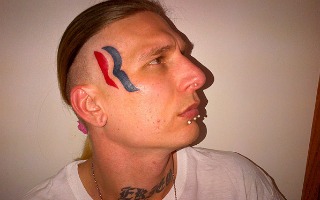 Eric Hartsburg, the die hard Mitt Romney supporter who had the Romey/Ryan logo tattooed on his face, has decided it’s time for a clean slate. Literally.

Hartsburg, a 30-year-old resident of Indiana, put his face up for “sale” on eBay in October of this year and was paid $5,000 to get a five by two inch tattoo of the Romney/Ryan campaign’s “R” logo on his forehead. Even after Romney lost on November 6, Hartsburg still seemed happy with his tattoo, telling POLITICO at first that he would never have the tattoo removed and had absolutely no regrets. He was even made an offer by tattoo-removal clinic Dr. TATTOF to have the ink removed for free after the election, but declined, saying, “I still love the ink and I am a man of my word and will keep the tattoo for life.”

Far from the life commitment he purported to have made, Hartsburg decided to keep the tattoo for a mere two months.

So, what prompted the change? Hartsburg now tells POLITICO that after he heard Romney’s post-election comments, especially the claim that President Barack Obama won re-election because he gave “gifts” to various constituencies, he felt Romney was acting like a “sore loser.” Hartsburg found it “shameful” and said, “There’s no dignity in blaming somebody else for buying votes and paying off people. I can’t get behind that or stay behind that.”

Hartsburg now plans to take Dr. TATTOFF up on their offer to have the tattoo removed for free and will fly to Los Angeles next week for his first session.

Dr. Will Kirby, the lead on the case, doesn’t think it will be a simple process. “I’m estimating that he’s probably going to need about seven to 10 sessions,” Kirby says. “It’s going to take the better part of a year.”

For his part, Hartsburg hasn’t written off facial tattoos – or political tattoos – altogether. While he says he’s “probably done” with political tats, he admits that the amount of money he can receive for facial real estate intrigues him. It sounds like he will definitely be putting the space on his face “back up for sale,” but also says he “might be a little bit more choosy about political tattooing.”