Ron Paul Responds to Heated Interview with MSNBC’s Alex Wagner: ‘I Didn’t Like What Happened’ 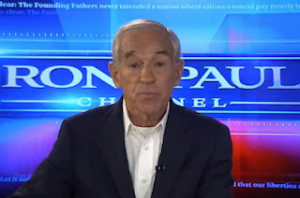 Ron Paul engaged in a particularly contentious debate over military intervention in Syria with MSNBC’s Alex Wagner Thursday, and judging by an audiointerview released today, he’s still recovering. Paul told the We Are Libertarians podcast that he “didn’t like what happened” on the network but has been getting some positive feedback from supporters.

“That little episode with MSNBC, I didn’t like what happened,” Paul said. “But afterwards, a lot of people close to me said ‘No, this is beneficial.’ A lot of people are willing to defend me, and they said it came out quite well.”

Paul also spoke about how his frequent media appearances reflect on his son Sen. Rand Paul (R-KY), who has become such a major figure in the Republican Party. “It’s hard for me because I know what they are doing,” Paul explained. “I am not important in the sense that I don’t have a vote, I don’t go to Washington, and that sort of thing.”

Rand, on the other hand, he said, “is very fluent, and he knows how to present the message. They fear him, and they don’t want that message out. He has a tough job. Though he gets some benefits from what I have done, he also gets all of the disadvantages in that if I have a position that the mainstream media can attack, they will. It is a combination.”

“I feel more badly about how it might hurt him than me getting hit again because I’ve been living with that a long time,” he continued. “I sort of expect it.” He said he does see a “sentiment shifting,” with more Americans respecting the libertarians positions that he and his son hold.

“If we win this vote, in many ways it will be vindication of the libertarian position on non-interventionism,” Paul said, offering his “hope” that Congress votes down the resolution to strike Syria.

Listen to audio below, via We Are Libertarians:

[h/t We Are Libertarians]
[photo via screengrab]