Well, welcome to the race, Rick.

Just a few days after Rick Perry officially announced his candidacy, it seems like everyone’s gunning for him. However, while the President’s shots have gotten the most attention, there’s a slightly unorthodox campaign being waged against the Texas governor. A man named Robert Morrow has been on a one-man crusade to stop Perry and has now run a full-page newspaper ad in the Austin Chronicle looking for any potential mistresses the candidate may have. 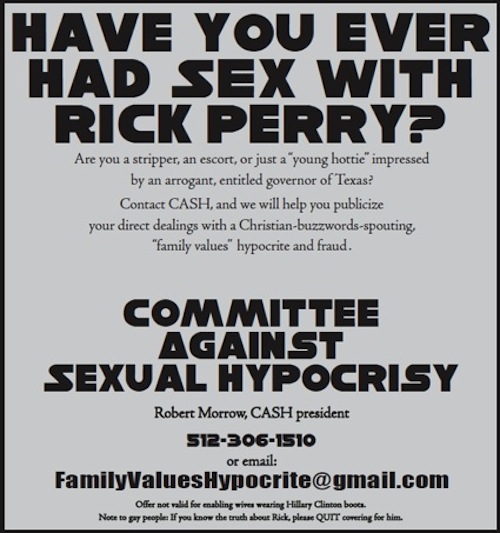 Morrow, a Ron Paul supporter and “a three-time delegate to the Texas state GOP convention,” is very much not a fan of Perry. He’s previously been promoting a lengthy screed he wrote against the man entitled “Tea Party Fraud Rick Perry is Political Herpes.” In it, he claims to know about Perry’s extramarital affairs because he is “a patron of Austin strip clubs” who has “excellent contacts in the Austin strip club community.”

Salon points out that Morrow has previously gone on the offensive against Hillary Clinton, paying for and voicing a series of 2008 robocalls that made the similarly unsubstantiated claim that she had “Hillary knew about and helped cover up Bill’s rape of Juanita Broderick.” In fact, his Perry ad even includes a random knock on the “enabling wives enabling Clinton’s boots.” This comment comes right above a call for Texas’ gay community to out Perry as one of their own.

Wow, accused of sleeping with strippers and being secretly gay in the same ad? Running for president sucks.

However, the most fascinating thing about the ad is probably that Morrow appears to have used a font similar to that of the Star Wars movies. This combined with the fact that it’s all text makes the whole thing seem like the opening crawl to the weirdest Star Wars movie ever.

Not a bad Star Wars movie, mind you. Just…weird.