Rothman: Will Russian Invasion of Ukraine Expose Snowden as It Has RT?

Rothman: Will Russian Invasion of Ukraine Expose Snowden as It Has RT? 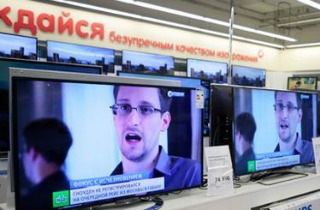 If there has been one even remotely positive result of Russia’s decision to destabilize the international environment and unilaterally violate the territorial integrity of a neighboring European nation, it has been that the average American is now perfectly able to identify the Kremlin-funded cable news network RT (formerly known as Russia Today) as what it is: a propaganda outfit.

The implosion of RT began just days after Russian soldiers and hardware began streaming across the border into the Ukrainian territory of Crimea. RT anchor Abby Martin ran screaming off the reservation and sharply criticized Russia for failing to live up to the veiled anti-American bromides dressed up as internationalism gracelessly employed by Vladimir Putin in his New York Times op-ed in September of last year. She was promptly dispatched to Crimea by her employer in order to gain proper context.

RT anchor Liz Wahl took the brave step of resigning from the network live on the air. She later rebuked Martin for remaining with the network in spite of her self-professed internationalist principles. Wahl noted that Martin’s career at RT has been characterized entirely by saying what “the Kremlin likes,” which has consisted primarily of attacks on America’s political establishment for safeguarding the United States’ lone superpower status.

Even former CNN host Larry King, whose Ora TV show broadcasts on RT, has strongly denied that he has any contact with management at that network where he once appeared to praise Putin’s “it” factor.

The great awakening of RT’s staff has provided Americans who are only marginally tuned into the news cycle with an important frame of reference; even RT’s own employees have denounced that institution as an outlet dedicated furthering the narrative preferred by an aggressive, expansionist Moscow at the United States’ expense. And you thought the Cold War was over?

Russia’s invasion of Ukraine may have debilitated one division of Moscow’s propagandist army, but battalions more fight on for the Kremlin’s causes. One phalanx of Russia’s war for the hearts and minds of those in the West made an appearance today at the Texas-based tech conference South by Southwest. Former National Security Agency leaker Edward Snowden may not have set out to become a propaganda tool for America’s enemies, but he has become just that.

Addressing the conference from an undisclosed location in Russia, where Snowden has sought and received political asylum as a fugitive from American justice, attacked the NSA, Gen. Keith Alexander, and Director of National Intelligence James Clapper.

Snowden remains a hero among a number of groups and institutions for exposing the sprawling NSA domestic surveillance program -– leaks which have prompted internal review processes and pledges from the president to reform those programs — but those beatifying him rarely note that the NSA’s metadata warehousing program was just a fraction of what Snowden revealed.

After providing the governments of China and Russia, America’s two largest international competitors, he exposed to the press vital US sources and clandestine intelligence methods which have forced American operatives to review and alter established practices. What’s more, he leaked data revealing that Washington spies on members of both China and Russia’s governments. While this revelation shocked precisely no one, it did provide both governments with propaganda victories which they have used to foment hostility toward the United States and create sympathy among their citizens for their autocratic governments.

Snowden was not asked tough questions about how his leaks have harmed American national security and exposed trade secrets to antagonistic foreign governments by his cautious interviewers with the American Civil Liberties Union. Nor was he asked about his Russian host’s violation of international law with a good, old-fashioned territory grab. They cannot ask him those questions because he cannot answer them -– it would undermine Moscow’s mission for Snowden.

“I took an oath to support and defend the Constitution,” Snowden told the 3,000 conference attendees on Monday. “And I saw the Constitution was being violated on a massive scale.”

But Snowden is today being willingly used as a propagandist tool for one of the Constitution’s preeminent foreign enemies. Russia’s adversarial relationship with the West has been exposed by Moscow’s brazen violations of international norms. What’s more, the Kremlin’s actions exposed RT and its supporters for what they were. Will they also finally expose Snowden for what he has become?