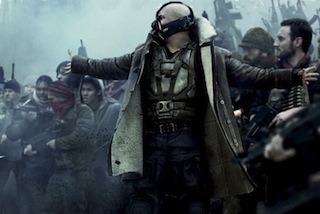 They are rising up. Seeking to stop perceived injustice, they have sought to end it themselves, leaving only chaos in their wake. No, I’m not talking about the criminals revolting under Bane in the new Batman movie. I’m talking about the movie’s fans who are so furious that anyone would give it a bad review, that Rotten Tomatoes has, for the first time ever, the movie review aggregator has had to suspend comments on a movie.

Gee. Thank goodness I write for a politics site where the discourse is civil.

It all started when Warner Brothers ended the embargo and allowed critics to publish their reviews earlier this week. While the movie has been generally well received (earning its fair share of flat out raves), not everyone has been welcoming it with open wings. This has infuriated fans who, despite not having actually seen the damn film themselves, are aghast that anyone who actually has could think it anything less than great. They descended on the Rotten Tomatoes comments section, slamming any critic who offered a less than positive critique. And it’s not just Rotten Tomatoes that’s been affected. Hollywood and Fine, the review site of the first critic to post a negative review, Marshall Fine, received so much traffic from angry fans that it went offline for a while.

This isn’t the first time something like this has happened. It’s happened for a number of large franchise films in recent years where the fan love is strong and the dissenting voice is small. For instance, back in 2010, Toy Story 3 was on its way to a perfect 100% accumulated score on Rotten Tomatoes. However, when a few negative reviewers “ruined” that, the fans reacted very poorly.

However, the Dark Knight Rises is the first time Rotten Tomatoes has ever had to take such serious action. On Monday, when the comments started getting bad editor in chief Matt Atchity was forced to write a special blog post explaining that his staff would be “policing” the comments, warning that anyone writing threats would be banned, and desperately pleading for users to not “be a dick.” This, however, wasn’t enough.

He explained his nuclear option of suspending the comments altogether to the Associated Press:

“‘The job of policing the comments became more than my staff could handle for that film, so we stopped the comments altogether,’ said Atchity. ‘It just got to be too much hate based on reactions to reviews of movies that people hadn’t even seen.’

‘There are a lot of options on the table,’ said Atchity, who is worried about a similar backlash when director Peter Jackson’s ‘The Hobbit: An Unexpected Journey’ is released later this year. ‘We may do away with comments completely or get to a place where comments are only activated after a movie opens.'”

As of yet, there is no word from Rush Limbaugh on how all of this has actually been orchestrated by super villain Barack Obama.