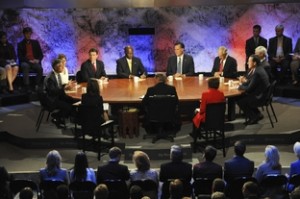 Tuesday night’s Washington Post/Bloomberg News economics debate had a new quirk: the Republican presidential candidates were seated at a roundtable instead of standing on a large stage at spaced-out podiums. It messed with the status quo a little bit–previously-unseen personality elements came out and some candidates wallowing in the bottom of the polls showed a little fight. Sure, the subject matter was a little dry, but the two hours went by pretty quickly, and it ended up being kind of… fun. So here are the grades of the participants in the debate. Not from an ideological standpoint, but from how they performed, showed off their personalities, and worked within the dynamic of the group.

Michele Bachman: If Robert Jeffress was appealing to a certain group of Christians by slamming Mormonism, then Bachman may have done the same by pointing out that Herman Cain’s “9-9-9” plan flipped over was the mark of the beast, remarking not so subtly that, “the devil is in the details.” She was also rocking some serious french tip nails, which ended up being a little distracting, if anything, because it made one wonder if she’d tone them down for, say, a somber White House speech addressing the nation. And even though most people already know this, it’s still kind of jarring to hear her say she has 28 kids. B-.

Rick Santorum: He made a stellar point arguing against Cain’s 9-9-9 plan by asking, “How many people here are for a sales tax New Hampshire?” and he showed more personality than he has in past debates. Where he had come across before as a kind of comedian giving stiff lines and jokes that fall flat, he seemed at ease at the debate, like he had just come back from a two-week vacation to Hawaii after working every day for three straight years. He even corrected Charlie Rose when Rose called on him to ask a question out of turn. Maybe the man thrives at a roundtable; perhaps it was just a good night, but Santorum had a surprisingly lively showing on Tuesday. B.

Herman Cain: Part of Cain’s appeal in earlier debates was that he was one of the candidates who would give a straight answer to a question. But on Tuesday night, he seemed to be tied to repeating 9-9-9 as often as he could. This was the most politician-like he has seemed so far, and not in a good way. Granted, he and his plan were attacked pretty often by the other candidates–Charlie Rose pointed out that as long as the other candidates kept bringing it up, he’d have to go back to Cain for a response–but Cain seemed to be a little more flustered by it all than he had in the past. When Jon Huntsman, for instance, made the joke about thinking 9-9-9 was the price of a pizza, Cain heatedly went back to the point twice in his retort, without that sense of humor that he had shown in earlier debates. C.

Mitt Romney: Maybe it’s because he was seated, and didn’t have the full-on stiffness that he does in the podium debates, but Romney seemed relatively relaxed at the table and gave off almost a head-of-household vibe, especially in the “ask each other questions” segment, where he handled the would-be gotcha questions with ease, even dropping in that his company started Staples, The Sports Authority, and a steel mill in Indiana. He still has that pesky problem of not directly answering the question he’s asked, but points to Romney for sticking to his guns about whether a hypothetical question by Julianna Goldman was actually hypothetical. B.

Ron Paul: It was sad that Paul barely had any face time in the debate, because he’s another candidate who tends to give straight answers (at least at first, before he winds down into a few stream-of-consciousness points). But in an economic debate, it had to be frustrating for Paul supporters to see him somewhat thrown on the backburner. He kept dropping tantalizing tastes of how deep his knowledge runs–references to Austrian economists, his views on ending and auditing the Fed–but was almost squeezed out of relevance. Jon Stewart was right! I.

Newt Gingrich: It’s kind of amazing that Gingrich is polling at such low numbers. Maybe it’s because he left a bad taste in everyone’s mouths after his run as Speaker of the House. Perhaps some people just think of him as a caricature and a vestige of times past. But his answers to the questions last night–and so far in pretty much every debate–were smart, well-researched, and thoughtful. He didn’t talk around questions and hammer home talking points; he actually gave a direct answer to anything asked of him. Perhaps his performance will give him a bit of a push, but if it hasn’t happened yet, it’s doubtful that last night’s roundtable is going to change much. A.

Rick Perry: Perry wasn’t a disaster in this debate, but he wasn’t exactly stellar, either. Remember in 2008, when people were clamoring for Fred Thompson to join the GOP fray, everyone got really excited for a week, and then he came into the debates and underwhelmed? Perry is quickly becoming Thompsonv2.0. He has awkward pauses in his answers, he seems to be fielding attacks from all angles, and he’s not doing anything memorable in the debates. Outside, of course, of rolling the “r” in Susana Martinez. C.

Jon Huntsman: Huntsman played the role of the motorcycle-riding cool uncle at the dinner table, who just rolled into town and enjoys antagonizing your dad. He was cracking jokes and firing off subtle quips. It wouldn’t have been a huge surprise if the camera panned to his left and revealed a beer on the table next to him. It’s obviously not the best way to choose a president, but he’s at least giving voters a taste of his personality, which has been somewhat lacking in previous debates. If he hits that perfect balance of joke-cracking and serious policy (coming up with a catchy 59 Points or 9-9-9 plan, for instance), he may still have time to gather some momentum. B-.