Casey! Amanda! Conrad! How (And Why) Salacious Trials Clawed Their Way Back Into The News Cycle 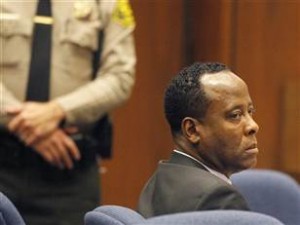 Remember Court TV and the national obsession with high profile trials? For about a decade from O.J. Simpson to Scott Peterson and Natalee Holloway the country seemed to have an insatiable appetite for soap opera like details that slowly and painstakingly emerged day in and day out in courtrooms and from investigations around the country. Courthouses regularly became tent cities with media encampments at high profile trials. Some judges and lawyers (and witnesses ie. Kato Kaelin) became more recognizable than most movie stars. Sometimes, the cases addressed important issues like in the trial of Oklahoma City bomber Timothy Mcveigh or assisted suicide doctor Jack Kevorkian or most obviously, Bush v. Gore. Others were far more frivolous like Anna Nicole Smith‘s lawsuit or a random celebrity drunk driving or drug case. Multiple daily cable news shows hosted by the likes of Geraldo Rivera, Greta Van Susteren, Nancy Grace (and me) covered the minutiae with analysis and debate from lawyers and participants.

But then something miraculous and unexpected occurred. At the end of the last decade, the media and public seemed to move on. With it, Geraldo went weekly, Greta went into covering politics and Court T.V. folded into a reality network. It seemed the high profile trial had gone the way of the newspaper: still relevant but hardly the media mainstay it once was.

So what happened? How did the trials of Casey Anthony, Amanda Knox and Conrad Murray capture the nation’s attention like it was 1999? Was it that the country simply became far more fascinated with politics in the Obama era? Maybe, but that hardly explains the depth of the shift. No, I think it is possible that reality shows became an artificial sweetener for those seeking a trial sugar rush. The transformation of Court T.V. To TruTv and its host of outrageous reality shows says it all. Following real lives at hyper speed was far more interesting and time efficient than often arduous and technical trials. From MTV’s Real World to Survivor, The Apprentice to The Bachelor, the public could follow what seemed like real lives and conflicts with verdicts as to their future rendered in far fewer episodes. Reality junkies could discuss and debate whether the latest contestant being eliminated was fair and just. While reality shows continue to thrive, they seem to be evolving with often staged contests giving way to (more) real ones involving dancing, singing or “performing.” The public may simply be tiring of the faux reality shows (although I can’t really explain the continuing success of the Kardashians). “Real” reality could be the new black, explaining why trials are back in vogue.

Sure the fact that a number of recent trials have been televised is a factor and yes Nancy Grace has never stopped her legal verbal dancing (in addition to her more recent actual ones). But something is in the air and in between far more important events like the Arab summer, the economy, jobs and the wars abroad, the resurgence of trials is nothing to fear. Much to the chagrin of many, you can argue it is even a good thing and not just for my work as a legal analyst. For all the moaning about the media’s coverage of high profile trials, its a lot better than reality shows, the public learns about how our third branch of government works and when it doesn’t, and it’s far less destructive to our democracy than the media’s horserace and scandal driven, political coverage.

So welcome back Court TV, you may not be with us, but your spirit lives on.