Roy Moore: America Was Last Great When Families Were United, ‘Even Though We Had Slavery’

Roy Moore: America Was Last Great When Families Were United, ‘Even Though We Had Slavery’ 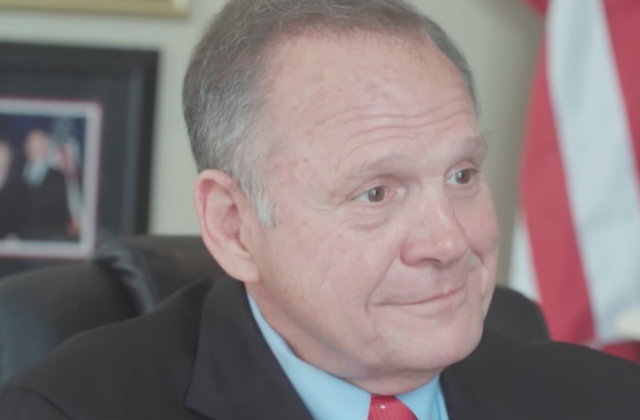 Just when you thought the Alabama Senate race couldn’t get any uglier or insane, a potentially pro-slavery quote from one of the candidates resurfaced on Thursday. And, yes, it is from embattled GOP nominee Roy Moore.

Back in September, the Los Angeles Times did a lengthy profile of the Alabama GOP primary runoff between Moore and incumbent Luther Strange, who had been endorsed by President Donald Trump. Buried down in the article was a description of an interaction between Moore and an African-American attendee of one of his rallies.

Just read it for yourself:

In response to a question from one of the only African Americans in the audience — who asked when Moore thought America was last “great” — Moore acknowledged the nation’s history of racial divisions, but said: “I think it was great at the time when families were united — even though we had slavery — they cared for one another…. Our families were strong, our country had a direction.”

Yep. It certainly appears that the ex-judge is making the claim that America was better when the country had slavery.

After the quote was dug up on Thursday, there was quite a reaction online, as one would imagine. And it was spread across the political spectrum.

Can't make this up — Roy Moore said in September that the last time America was great was when we had slavery. (h/t @reckonalabama)https://t.co/NMF4BCQ6ZS pic.twitter.com/XbpPtdifuS

Roy Moore said the last time America was great was during slavery.

With a straight face.

The man actually said it.

We've known for two years that "Make America Great Again" was code for this, but Roy Moore doesn't speak in code.

Roy Moore seemingly nostalgic for slavery: America “was great at the time when families were united—even though we had slavery—they cared for one another…. Our families were strong, our country had a direction.” https://t.co/kXZX3UXCD9

Roy Moore longs for the good old days when "families were united–even though we had slavery." Families were united? Slave owners ripped families apart, selling children to plantations far away from their parents, never to see each other again. https://t.co/mUbSu8OIdP

Roy Moore misses the days of slavery because "our families were strong" then. Never mind that slavery was a systematic assault on black families and mass rape of black women. https://t.co/GDlo7BPf8r

So Roy Moore:
molests kids
doesn't think women should hold office.
ditto Muslims
even worse about LGBT
and thinks there was no time better in America than the era of slavery b/c "families stayed together."

Moore is no stranger to tossing out inflammatory, racially insensitive and bigoted rhetoric. He’s said in the past that Muslims should not be allowed to serve in Congress, something he still stands by. The Republican candidate has stated that “homosexual conduct should be illegal.” And the twice-ousted judge has referred to certain minorities as “reds and yellows.”

And, lest we forget, in recent weeks the race has tightened up in the reliably red state of Alabama because Moore has been accused of initiating sexual contact with a 14-year-old girl when he was 32 and attempting to rape a 16-year-old, among other allegations.

The election takes place on December 12.