Rush Limbaugh: “If Obama Had Not Been African-American, He Would Never Have Been Elected” 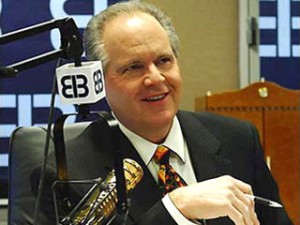 Rush Limbaugh touched on the fun subject of race on today’s show, using Ronald Brownstein’s article in the National Journal about the seeming exodus of whites from the Democrats as a starting point. However, while the implication there would be that Barack Obama’s race may now be scaring off voters (or the only thing keeping some around), Limbaugh still took the opportunity to knock the President’s qualifications by claiming that, had he not been black, Hillary Clinton would be in the White House.

“[For] the media, the Democrat adults, and the establishment, the Clinton years were their Nirvana. And, if Obama had not been African-American, he would never have been elected. It would have been Hillary and we’d still have had the love affair with the Clintons going on. This is the injection of race into the Democrat primary and overall presidential contest did what the insertion of race does to most subjects; it totally distorts it.”

While the overall theme may be about how much the Left loves the Clintons, the race comments, coming from Limbaugh, definitely hold the implication that Obama was nothing but lucky, that he won some kind of genetic lottery with his blackness (or, y’know, half blackness). However, this is an interesting question, purely from a historical context. Just like in this last election, the clear feeling was that people wanted something different. They wanted something different than the Republicans specifically, but different than the usual in general. In that light, Obama’s race certainly could have helped him.

Still, this is a conversation that’s hard to have. Like Limbaugh, most people’s opinions would be clouded by their political feelings towards Obama. Besides there’s the whole awkward thing of…well, you know Glenn Beck’s least favorite Eric Holder quote?

You can listen to the clip from Rush Limbaugh below: