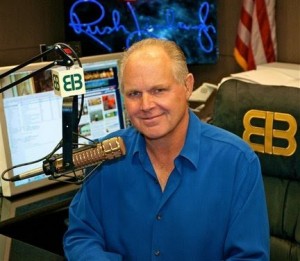 With many praising President Obama’s apparent move to the center and rebounding polling numbers, some, including reporters at Time are favorably comparing Obama to former President Ronald Reagan. However, Rush Limbaugh predictably is not along for the praising Obama ride and clearly thinks the comparison alone tarnishes the legacy of Reagan.

Declaring Reagan and Obama have nothing in common with one another, Limbaugh continued:

“If Reagan were alive today, watching all this, for crying out loud folks – he’d wish he have Alzheimers so he wouldn’t be aware of what’s going on, see what’s been done to his legacy and the great work that he did as President.”

Rush found it hilarious that despite people on the left always despising Reagan, when their “little guy” Obama gets in trouble, they ignore their own heroes on the left and instead turn to Reagan “to draw this illusion that their . . . man-child is moving to the center.” Rush then played several audio clips of Reagan, and Rush was able to deduce from Reagan’s words that he was specifically warning the country against people like Obama. Therefore, Rush concluded:

“This just goes to show, that . . . when this regime, when the media, the American left, needs to look back to history to try to connect with the majority of people in this Country, they have to go to one of the greatest Republican presidents of all time to try to pull it off.”

Seems like Rush should at least be happy that Reagan is getting some respect now as a model of a successful President, but the thought of Obama and Reagan being mentioned in the same breath was all it took to get him agitated.