Limbaugh Reminds Us That The Left Aren’t Just Opponents, They’re The Enemy 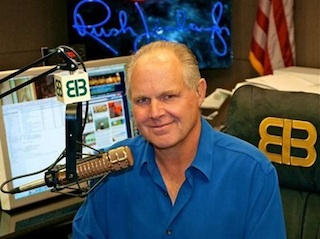 There is absolutely no room for any gray in the black and white world of Talk Radio. Rush Limbaugh, one of the kings of said world, continued his crusade to crush all gradients of color by setting his sights on those scum, the Moderates, or “whatever the RINOs are calling themselves these days.” He gave an example of one of these fools in Gov. Mitch Daniels, a man who dared to say that Democrats aren’t the enemy but are merely political opponents. Blasphemy!

Daniels’ heretical comments came during a speech at CPAC this past February. In which he said, “We should distinguish carefully skepticism about Big Government from contempt for all government” and later, “Remember, we have no enemies, only opponents.”

Limbaugh gave him the lambasting he deserved:

For me, and I’ll limit this to myself, but the American Left today, with their designs on this nation, are an enemy.”

Of course, in Daniels’ full speech you’ll see that he was actually quoting Ronald Reagan. However, Limbaugh said the Left of “today” and, as we all know, if President Reagan were alive today, he’d clearly be sentencing all Democrats to death for being the traitors that they obviously are. Duh.

Limbaugh tried to play the clip of Daniels’ speech but there was an audio malfunction and all that came out was a distorted voice that sounded like some kind of demon. Yet, maybe this wasn’t a malfunction. Only a demon from Hell would soil himself by trying to see the common humanity in people who don’t vote the same way he does. Yes, RINOs may try to call themselves “moderates” but, in the black and white kingdom of Talk Radio, “demon” is the only moniker that fits.