Rush Limbaugh: The Last Thing This Regime Wanted Was An ‘Alive Bin Laden’ 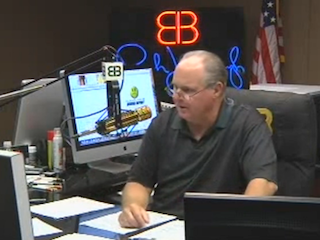 Conflicting reports have arisen as to exactly what went down in that house in Pakistan with some now questioning whether or not the United States ever wanted to take Osama bin Laden alive. On his show today, Rush Limbaugh gave some theories as to why the White House might have been loathe to have a captured, living Bin Laden. Limbaugh explained that that would be the “last thing” they’d want as then they’d have to put him through their “sissified” legal system.

Citing the conflict between Eric Holder’s claim that the shooting was in “self-defense” and Pakistani officials remarks that that there were no guns in the building, Limbaugh had this to say:

“There is no way this administration is going to bring him here alive and apply their own sissified techniques to this guy. You talk about politically DOA. You bring Osama anywhere, you put him in Club Gitmo, and you give him an ACLU lawyer and then you promise him a trial, everything they’ve done with Khalid Sheikh Mohammed. There is no way they were going to apply their own sissified policies they’ve tried on everybody else on Bin Laden. And, if they kept him alive and they brought him here and they did anything other than that, their base would go absolutely nuts.”

Of course, Holder actually said that Bin Laden was shot in “national self defense” which is very different and doesn’t imply that he was firing at the US soldiers therefore not conflicting with the Pakistani report. However, Limbaugh is right that the official story has seen some changes in the past few days.